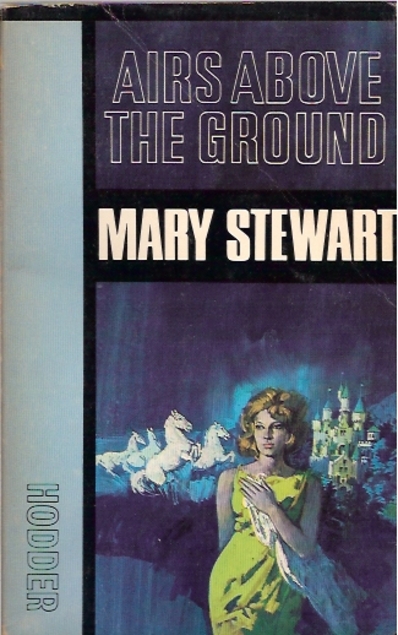 Airs Above the Ground was first published in 1965 but my paperback copy is from 1967, I really like the cover and I found the book to be a great read. In fact I’m sure that if this book had been written by a man it would have had a much higher profile and might have been made into a film. A lot of it is full of suspense, it’s much more of an adventure/mystery than for instance – John Buchan’s books, in my opinion.

On page one the Guardian newspaper is mentioned as the main character Vanessa March is a Guardian reader. Presumably Mary Stewart was also one as she incorporated a classic Guardian misprint in an article from the newspaper. The word ‘churned’ appears when it should have been ‘burned’. In case you don’t know, the Guardian is affectionately called the Grauniad as the typesetters were always making mistakes. Of course nowadays it’s all done on computers so that isn’t such a problem – or feature.

Anyway, back to the book. Chapter one begins in Harrod’s tearoom where Vanessa March is having tea with her mother’s old friend Carmel. Vanessa has only been married for a few years and she’s had a bit of a ‘domestic’ with her husband Lewis as he has had to change their holiday plans at short notice. From something that Carmel says – it seems that Lewis might not be where he says he is and so follows the adventure with Vanessa travelling to Austria in search of the truth and Lewis, with help from Tim – Carmel’s seventeen year old son who is in need of time away from his suffocating mother.

Tim’s a huge fan of the Spanish Riding School in Vienna and the Lipizzaner horses, and he’s very impressed that Vanessa is in fact a trained vet. With the storyline moving on to a travelling circus featuring animals (a pet hate of mine) it was a bit of a wonder that I wasn’t put off by that, although circus acts don’t feature too much.

I read this one for the Read Scotland 2017 Challenge. Sadly I don’t have too many of Mary Stewart’s books still to read now, I think I’ve read them all except My Brother Michael and maybe Madam Will You Talk.

8 thoughts on “Airs Above the Ground by Mary Stewart”