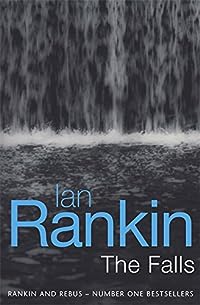 The Falls by Ian Rankin was published in 2001, it’s a Rebus book and unfortunately I remembered it fairly well from when it was dramatised for TV which slightly marred my enjoyment of it.

There’s a missing student, she’s studying at Edinburgh University and she comes from a wealthy family, her father owns a private bank so maybe she has been abducted. Her boyfriend is from an equally rich family and he has a history of getting into trouble with the police.

During the investigation it transpires that the missing student is into internet role-playing games. Is a games-master involved in her disappearance?

The city of Edinburgh is a big part of this series and for me that’s one of the attractions of the Rebus books, I know most of the places mentioned in them, so I can easily imagine all of the locations, always a plus I think.

The thing that is most striking about this one though is how old-fashioned it seems now. They always say that nothing dates so quickly as technology and it’s absolutely true. In this book hardly anyone has a personal computer and Siobhan is forced to borrow one from the one colleague who just has to have any new gadget that comes out – although he rarely uses them, and of course it’s all costing Siobhan a fortune as she’s having to use dial-up to get on the net.

Otherwise it’s the many mentions of property prices in Edinburgh that are so dating. Rebus is in the throes of selling his flat which he thinks is worth about £160,000 as the prices have shot up since he bought it. Nowadays his flat would probably sell for at least double that price.

I’m wondering how many years have to pass before crime fiction becomes vintage crime and so develops a historical ambience – more than sixteen years anyway.