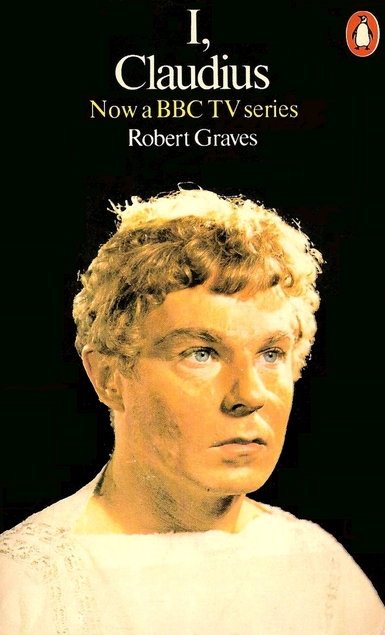 You will probably notice that my copy of this book is the 1977 tie in to the BBC dramatisation of I, Claudius. Shockingly it has taken me 40 years to get around to reading it! The book was originally published in 1934.

I really enjoyed reading I, Claudius although I’m not sure if I would have enjoyed it so much if I hadn’t watched the BBC drama – twice over the years – as there are so many characters thrown at you. Mind you often they didn’t hang around for very long as so many people were poisoned or otherwise given the chop.

It’s a very readable history of Rome, up to A.D. 41 supposedly written by Claudius, a disabled, stammering, twitching grandson of Augustus who was despised by his entire family, but inside his less than perfect body there was a clever and quick witted brain which helped him to survive when all the rest were being murdered or banished to tiny islands.

This book won the James Tait Black Memorial Prize as did the sequel Claudius the God which was published in the same year. Possibly they were originally published in one volume.

If you want a more in depth review of this book then hop over to She Reads Novels and Helen’s review of I, Claudius.

This is one of my 20 Books of Summer.

For once I think that the TV programme was just as good if not better than the book, Derek Jacobi was brilliant as Claudius and John Hurt as Caligula was unforgettable. Sadly he died earlier this year. Have a look at this excerpt where Caligula who has decided he is the god Jove has taken on his enemy Neptune.

3 thoughts on “I, Claudius by Robert Graves”