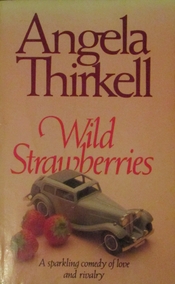 Wild Strawberries is the second of Angela Thirkell’s Barsetshire books, first published in 1934 but my copy is a 1983 Hamlyn paperback.

This one revolves mainly around the Leslie family. I remember someone commenting years ago that the Leslies were their least favourite characters, and I can see that some people could find them very annoying indeed, but they’ve suffered tragedies that money can’t cushion. There is a sort of sense of entitlement pervading them but for me there’s just enough charm there to be able to forgive that, although I could see David Leslie far enough – as they say.

Lady Emily Leslie is so disorganised that she can’t get anywhere on time, not even to church, and it holds everybody up. Even when she gets there she causes chaos with her stage whispers as she tells everybody where to sit. The eldest son was killed in the Great War and the youngest son David is absolutely full of himself, has umpteen lady friends and never gives a thought to any of them. John who is son number two is the sensible one. His wife Gay died after just a year of marriage.

With the arrival of a family friend to stay for the summer and some French visitors who have rented the vicarage (I doubt if that was actually possible) the story evolves with the usual bits of romance, uppity servants and mothers of young children who are incredibly relaxed about them, not batting an eye when they cause havoc and mess. After all, why worry when the nanny will sort it all out!

This one is entertaining and interesting as David Leslie is hoping to get a job at the BBC which is in its early days and it seems that any ‘toff’ with the right sort of an accent could get a job there – even women! It’s obvious that most of the young men working there were gay, but sometimes settled for a ‘companionate’ marriage – to the right sort of girl – with money of course.

At one point David Leslie is at the railway station to meet someone and the London bank-holiday train disgorges lots of hikers, a few of which give him the Fascist salute – I wonder just how common that was in 1934, just a year after Hitler took power in Germany.

This book is one of my 20 Books of Summer.