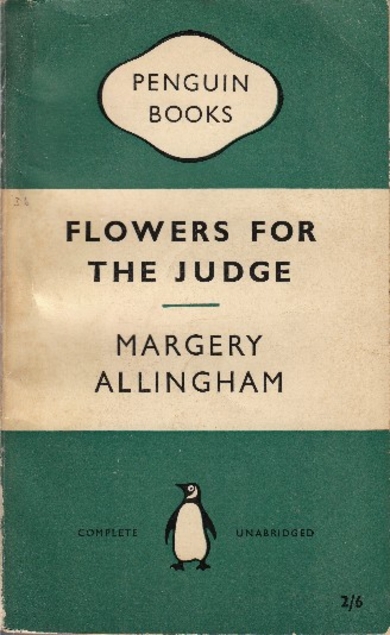 Flowers for the Judge by Margery Allingham was first published in 1936 and I must say that I loved it. I think that Albert Campion’s character really improved in this one, in some of the earlier books he’s just too sketchy for my liking. It always seems to be Allingham’s The Tiger in the Smoke (1952) that people cite as Allingham’s best book but I wasn’t so impressed with that one.

Allingham dedicated this book to her publishers, presumably because the setting is a firm of publishers called Barnabas which has been going for generations and is now run by cousins. It’s a very conservative, old fashioned firm although years ago one of the directors had disappeared into thin air.

Twenty years on another director disappears although it’s some days before the alarm is raised by anyone. Paul is a bit of a strange person, married to Gina a much younger woman, an American, it’s a bit of a mystery why they married at all. The youngest partner is in love with Gina although she is completely oblivious of this fact. Campion gets involved in the mystery and with some twists and turns everything is satisfyingly sorted out.

Fogs were frequent menaces in cities in the UK at the time this book was written and Allingham describes one when she has a character saying:

‘As an American, Gina, you have a thrill coming to you. We are on the eve of a real old London particular, with flares in the streets, bus-conductors on foot leading their drivers over the pavements into plate glass windows, and blind beggars guiding city magnates across the roads for a small fee.

The title of the book comes from an old custom – judges carried a posy of flowers into the court to ward off gaol fever and nasty smells. You can read about it here. Obviously it was still being done in 1936 – at the Old Bailey anyway.

5 thoughts on “Flowers for the Judge by Margery Allingham”