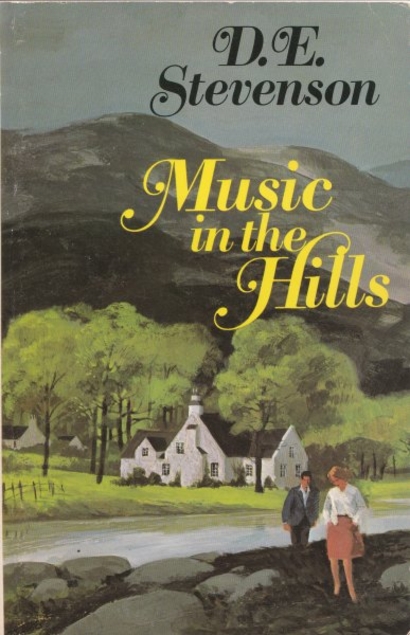 Music in the Hills by D.E. Stevenson was first published in 1950 and it’s the sequel to Vittoria Cottage. The setting is the Scottish Borders, not any specific town apparently but I imagine the countryside as being like that around Stevenson’s beloved Moffat.

James Dering has been in Malaya, chasing bandits for some years and he’s glad to get back to Scotland. He has made his way to Mureth where his Aunt Mamie and Uncle Jock have a farm. James is thinking about becoming a farmer too, he loves the countryside and animals but he’s not sure if he’ll be good at farming.

James had spent some time in London before making his way to Murath, but his romance with Rhoda an aspiring artist had ended badly and he is nursing a broken heart. Will the change of air heal him, or at least help him to discover what he wants to do in the future?

With a cast of couthie characters this is a bit of a comfort read although not everyone or everything in the neighbourhoods of Murath and Drumburly is sweetness and light. Aunt Mamie is perfect though, although she wouldn’t agree with me about that. She envies the way others can talk with ease to strangers and acquaintances, she feels too shy and knows that she’s often seen as being a bit snooty. A lot of readers know that feeling I suspect!

2 thoughts on “Music in the Hills by D.E. Stevenson”