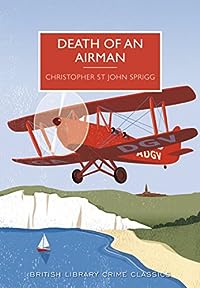 Death of an Airman by Christopher St John Sprigg was first published in 1934 but I read the British Library Crime Classics reprint. In fact due to circumstances beyond my control I read this book from cover to cover all in one sitting, it took me about five hours and it made my wait bearable, in fact I really enjoyed this one.

Edwin Marriott is an Australian bishop who is on holiday in England. As his diocese in Australia is massive he has decided that he’ll have to learn to fly so that he can visit his flock. He has chosen take lessons at Baston Aero Club which has quite a mixture of flying instructors including a World War 1 flying ace.

It’s evident from early on that there are tensions at the flying school and it’s not long before there’s a death. Is it just an accident, murder or suicide? The bishop helps to get to the bottom of it all aided by Inspector Bray of Scotland Yard.

I was kept guessing all along and had no idea what was going on, the plot is really convoluted and it’s just such a shame that the author had such a short career as his life was cut short when he was killed fighting in the Spanish Civil War in 1937. His real name was Christopher Caudwell.