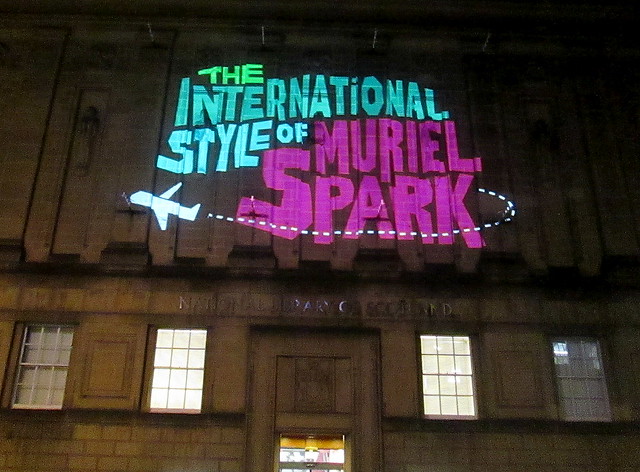 Yesterday we went up to Edinburgh for several reasons, the first one being to visit the Muriel Spark Exhibition on at the National Library of Scotland. It’s the centenary of her birth. When we got there I was disappointed to see that although they usually encourage people to take photographs they weren’t allowing it in this exhibition for copyright reasons apparently. She was born in Edinburgh but of course spent many years living abroad, mainly in Italy. Well the weather there would have been enticing apart from anything else. 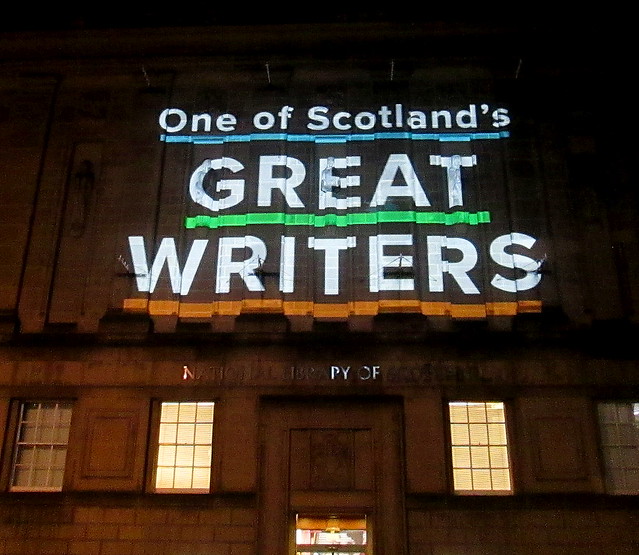 It’s such a shame that you can’t take photos as Spark seems to have been a hoarder from an early age so there are even jotters from her schooldays of poetry she had written and a school magazine that she had poems published in. She saw herself as a poet despite writing so many novels.

She was a bit of a party animal and corresponded with lots of famous people that she had made friends with including Graham Greene, Doris Lessing, John Updike, Christopher Fry, Miriam Margolyes, Maggie Smith, Vanessa Redgrave and even the then Prime Minister Harold MacMillan. There are letters or telegrams from them but the typewritten letter from Marie C. Stopes (the famous contraception for women pioneer) who wrote the book Married Love is a scream. Stopes was vice-president of the Poetry Society and she was incensed at Spark being made president. In her letter Stopes describes Spark as being impertinent to her and she demands to know if Spark had been divorced by her husband. Presumably Stopes didn’t think such a person was fit to be the president. Spark’s reply says that she has no intention of giving her any details of her divorce, implying that Stopes is a dirty old woman for wanting to know what she hopes are salacious details.

If you click on the link above you’ll be able to see some of the things in the exhibition, such as her ration card. There are a couple of her dresses, one a long dark grey silk dress and a lovely blue velvet dress which apparently features in one of her books, I can’t remember which.

If you’re keen on Muriel Spark it’s well worth visiting – if you’re not too far from Edinburgh anyway. There are lots of early copies of her books on display and I just realised that I have far more of her books to track down than I thought.

I think that like many writers Muriel Spark was odd, it’s hard not to feel for her son whom she seems to have abandoned at a very early age, later she was incensed by his devotion to Judaism as an adult – she had ditched that religion and opted to become a Roman Catholic. It looks like she had no maternal instincts which must have been painful for him. 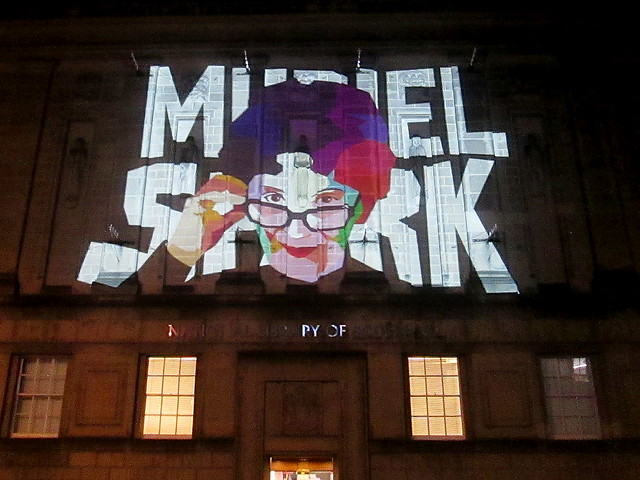 The photographs are of images that were being projected onto the front of the National Library of Scotland.