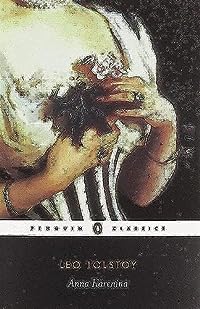 I’ve had Anna Karenina by Leo Tolstoy on my Classics Club reading list for years now and I’ve been put off reading it for a couple of reasons – namely the 800 odd pages and also the fact that I knew how it ended as I’ve seen it on TV (hasn’t everyone?). But I really enjoyed reading it. Just about everyone knows the story so I’m going to ramble a bit just about things that struck me about it, others probably won’t agree.

It’s fashionable (and possibly a feminist thing) to see Anna as a victim but she was a spoiled fool more than anything. Having made her young son the centre of her life she had no time for her husband Alexei Karenin who was what John Galsworthy would have described as being a bit of a cold fish – like Soames Forsyth. Anthony Trollope’s disastrous marriage between Lady Glencora and Plantagenet Palliser comes to mind too. These undemonstrative men are a common type in reality and their ‘buttoned up’ characters aren’t a problem for any intelligent woman of the low maintenance and level headed type.

Anna wasn’t astute enough to see that her husband was really very much in love with her. Possibly the fact that Anna’s mother had shamelessly implied that Karenin had compromised Anna’s reputation when he was courting her – so determined was she to get her daughter off her hands and married to a wealthy man – had left Anna feeling somewhat insecure.

I really wish that Tolstoy had written a prequel based around the upbringing of Anna (nee Princess Oblonsky) and her brother Prince Stepan Arkadyich Oblonsky. These two cause mayhem within their families, their own needs being the most important thing to them – and to hell with everyone else.

Compare Anna’s mother with Kitty’s family. Vronsky has courted Kitty for ages and everyone expects him to propose to her, but Vronsky is a ladies man and a bit of a flibbertijibbet so when a new face appears in the shape of the beautiful Anna he drops poor Kitty fast. Kitty is damaged goods now as far as society is concerned, her parents had relied on Vronsky being a gentleman and wouldn’t have considered twisting his arm to get him to marry Kitty, but Vronsky was far from being a gentleman. He’s soon sleeping with Anna which is something that Anna was evidently not doing with her husband otherwise she would have had a family as large as her brother’s (Prince Stepan) whose poor wife Dolly seems to be having a child a year despite the fact that she knows he is a serial adulterer. Anna persuades Dolly to stay in her abusive marriage despite the fact that Anna would never put up with being treated so badly.

Those people who are brought up with a feeling of entitlement are a blight on society but when for some reason they aren’t able to get their own way for once then the result is often a disaster, they don’t have the strength of character to take the blows that they’ve happily dealt out to other people.

The book swings between high society in St Petersburg to the country estate of Konstantin Levin. He is a friend of Kitty’s family and has been in love with Kitty for years. After he’s told that they expect Vronsky to propose to Kitty, Levin takes himself and his broken heart off to his estate, throwing himself into the work of improving the land. He’s a decent man who gets his hands dirty and I suppose he stands for the Russian people whereas the aristocrats of St Petersburg are the degenerate French speaking leeches.

When the relationship between Anna and Vronsky becomes fraught Anna falls apart very quickly and of course she ends up under a train. I must say that I think that part was really well written. I suspect that Anna’s last seconds are typical for people in that situation – they didn’t really mean it, but it’s too late to go back in time.

Life goes on for everyone else of course. At first I thought that maybe the book should just have finished with Anna’s death but – I was wrong.

I loved War and Peace but it’s a while since I read that one and I’m not sure which book is my favourite. Have you read them both, if so which one do you like the most?