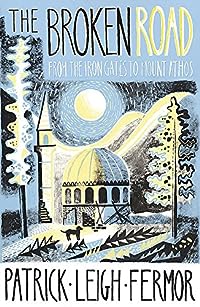 The Broken Road – from the Iron Gates to Mount Athos by Patrick Leigh Fermor was published in 2013 – posthumously. Fermor didn’t manage to get the book finished before he died. He had walked from the Hook of Holland in 1933 when he was 18 years old, planning to walk to Constantinople. He wrote two really good books about his experiences A Time of Gifts and Between the Woods and the Water. For some reason he couldn’t get down to finishing the trilogy off for years. I suppose that it was an awful long way to look back, also he had terrible bad luck with his notes and diaries being stolen more than once and also for some odd reason Harrods Depository apparently destroyed papers that he had lodged in their storage for safe keeping.

This one doesn’t quite match the heights of his earlier books but it’s still a great read. Again he’s hob-nobbing with all sorts of people from gypsies to aristocrats, sleeping in shacks and palaces and when he gets to Greece he walked from monastery to monastery, some of which were wealthy and others very poor.

He had studied ancient Greek while at school and was keen to learn modern Greek and it’s just as well he did as when World War 2 began he joined the British Army and his expertise came in handy.

Bizarrely there’s practically nothing about Constantinople, maybe it was a big disappointment to him.

The really sad thing about these books is that just about all of the people he writes about having met probably didn’t live that much longer as gypsies, Jews, Bulgarians, Rumanians and even Greeks obviously didn’t fare well during the war.

Fermor was a bit of a maverick and although as a youngster he had thought of joining the army the thought of the necessary discipline that that would involve didn’t appeal to him at all. When World War 2 broke out he joined the SOE and operated on German occupied Crete. He proved himself to be independent though – taking it upon himself to kidnap a German General Kreipe at one point. A film was made of that escapade – Ill Met by Moonlight.

Patrick Leigh Fermor died in 2011 at the age of 96 and you can read his Guardian obituary here.

8 thoughts on “The Broken Road by Patrick Leigh Fermor”