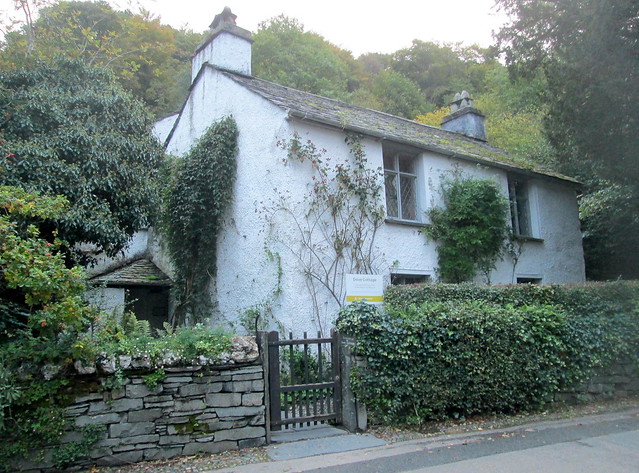 By the time we reached Grasmere last week dusk was beginning to fall, and as our hotel was a mile or so outside the village we drove into Grasmere and parked outside Dove Cottage, the home of William Wordsworth and his sister Dorothy to begin with and then after he got married they had to eventually squash five kids in there too. 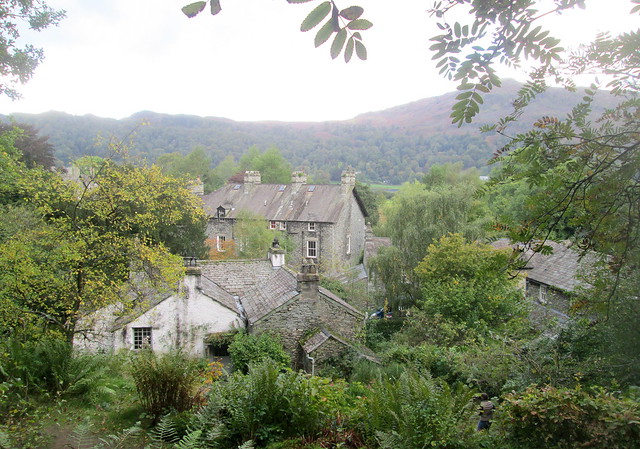 When the Wordsworths lived in the cottage there were none of the buildings around it that you see now, and they had an unrestricted view of the lake. 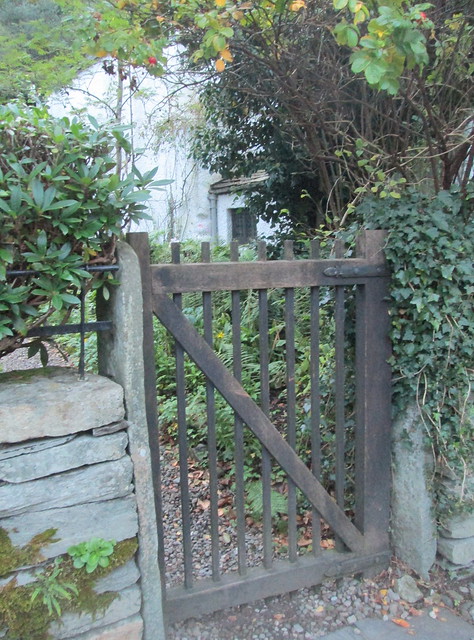 I was really glad that we decided to have a snoop around after the cottage was closed as we had it to ourselves and were able to look around the garden in peace. 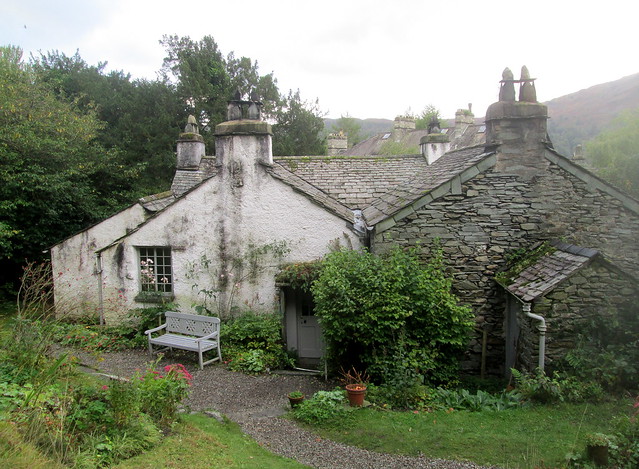 The garden is situated on a sloping site, it’s a bit neglected at the moment, I think they must be in need of some gardening volunteers, it’s a pity I live too far away! 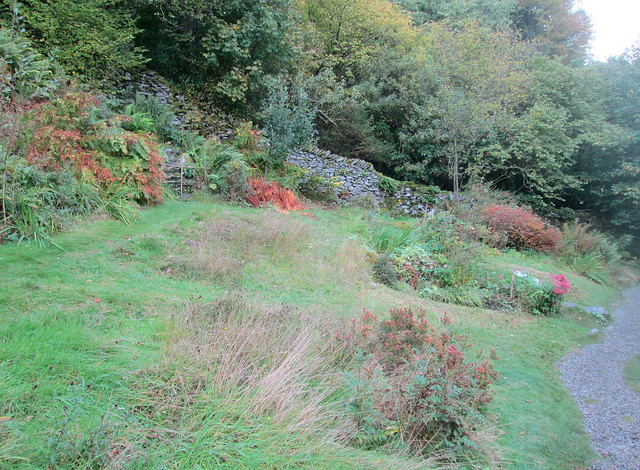 Steps lead up to what was a favourite spot with Wordsworth, this refurbished summer gazebo. 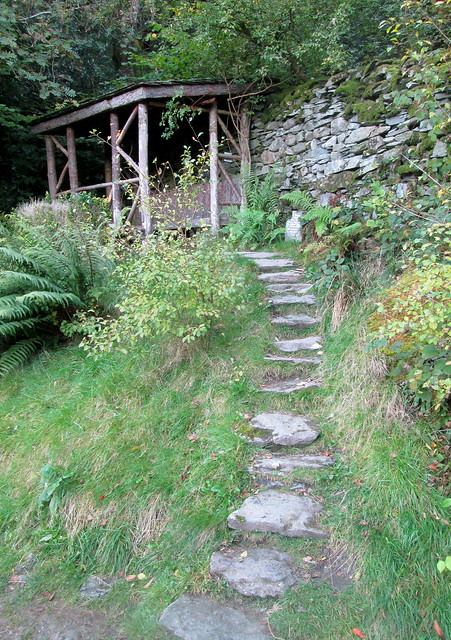 Back down close to the cottage some vegetables are being grown in the area where apparently an outhouse had stood in Wordsworth’s day. As it’s only a few steps from the cottage it must have been the earth closet. That would have been particularly handy as originally the cottage had been a pub and William and Dorothy were the first people to live in it as a home. 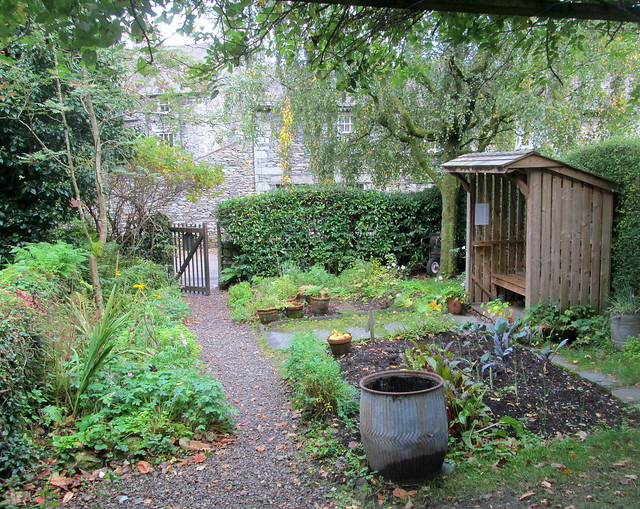 It’s a tiny cottage and it’s very dark downstairs and would have been even darker in Wordsworth’s day as the windows have been enlarged since then. We didn’t manage to get any photos of the downstairs but it consists of a small kitchen, a buttery which is a teeny wee room where they stored perishable food and a small living room which must have been used as a bedroom when all the children began to arrive. It feels a lot colder than the kitchen and you can hear the stream which flows underneath it. When it was in use they probably prised one of the slates up from the floor so they could place a container of milk in it to keep it fresh. They must have got their water from there too. There’s a small living room, quite cosy really.

Upstairs there are three small bedrooms. The one below was William’s, it was very cold upstairs as the fireplace couldn’t be used, the room quickly filled with smoke apparently. 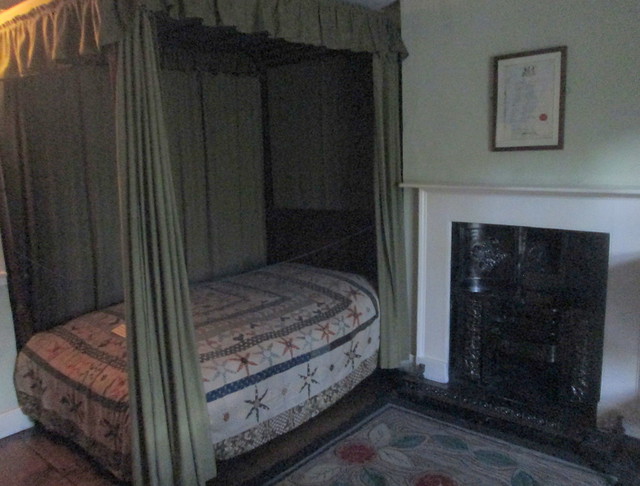 Dorothy chose thie tiny room below. In her day she papered the walls with old newspapers, presumably in an effort to insulate the place. It has been repapered since then but as you can see the damp is coming through badly. There is no fireplace in this room and it is directly above the cold buttery. I can see why she chose it though as it’s at least private, you have to walk through the other bedroom to get into this one. 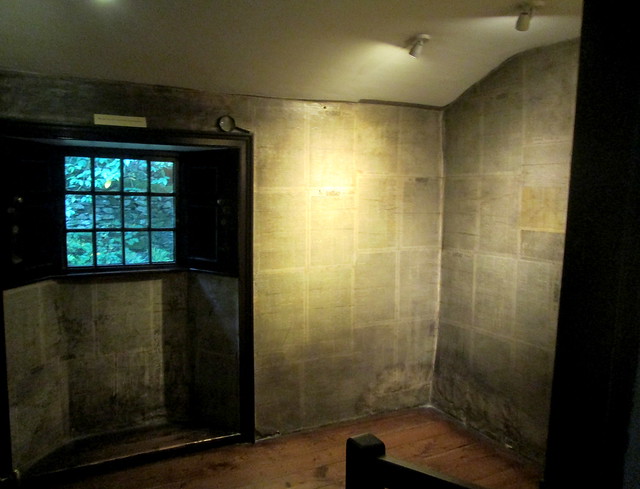 The upstairs sitting room is lovely and bright and the furniture and china did actually belong to the Wordsworths. 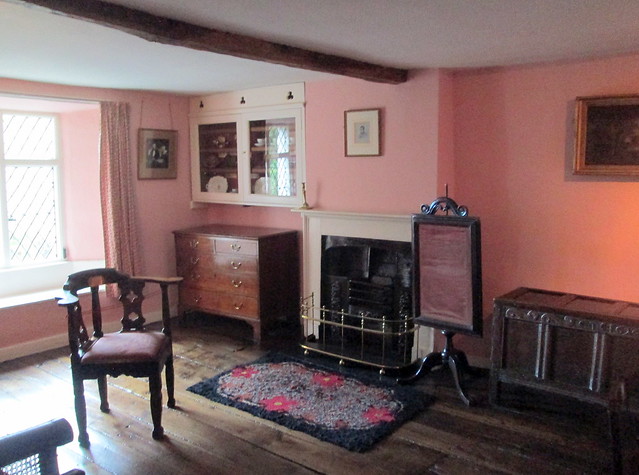 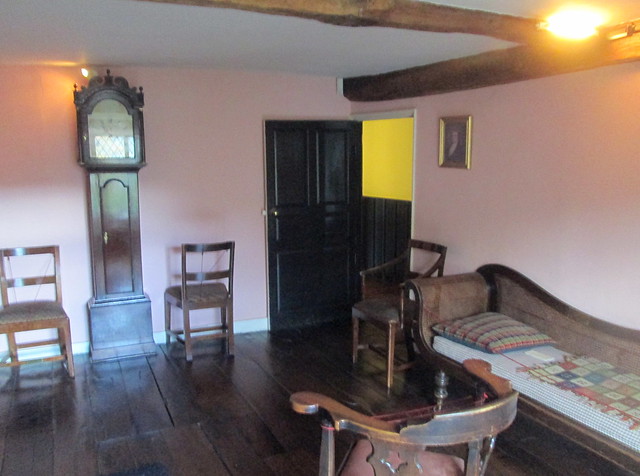 Normally the cottage housed eight people, the five children, William, Mary his wife, Dorothy his sister and another female relative and Dorothy wrote in her diary that at one point there were fifteen people staying in the house, it’s one way of keeping warm I suppose!

Sir Walter Scott visited them and I can just imagine his astonishment at the size and simplicity of the place. But Wordsworth was very happy here and although they did later move to a house in nearby Rydal, in the end they all came back to Grasmere to be buried. 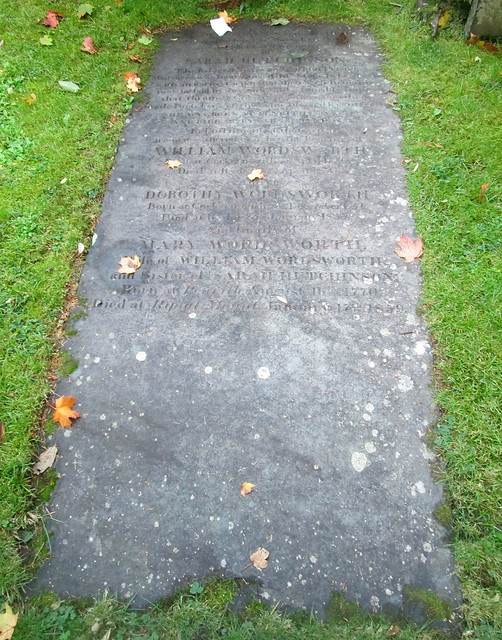 There are lots of Wordsworths in the graveyard.

The entry charge also includes a visit to the nearby Wordsworth museum which is very interesting and contains a lot of personal things, including Wordsworth’s dental ‘pokey’ things and some of his clothes.

We were really glad that we had visited the exterior of the house earlier as by the time we got there just before the cottage opened in the morning hordes of foreign students turned up just behind us, luckily we managed to get in just before they did, otherwise we couldn’t have taken any photos at all. They were Dutch I think, so surprising as I wouldn’t have thought Wordsworth would be well known there.