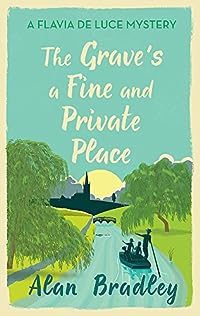 The Grave’s a Fine and Private Place by Alan Bradley was published earlier this year, but I have seen it reviewed by so many other bloggers that I had somehow convinced myself that I had already read it, it was only a couple of weeks ago that I realised I was wrong about that. Luckily I was able to get it quickly from the library, unluckily I also discovered a lot of other interesting books there that I just had to take home with me – when I should be concentrating on my own books.

Anyway, in the previous book in this Flavia de Luce series their father had died unexpectedly, I found it really sad and I know that that coloured all my feelings about the book. In this new one all three de Luce girls are dealing with the shock of losing their father and the uncertainty of their futures. If bossy Aunt Felicity gets her way there will be even more changes in their lives.

They’ve been persuaded to go away for a summer holiday and as the trusty Dogger is punting along the river, Flavia takes to trailing her hand along the water, of course in no time at all her fingers have hooked a corpse and so begins the mystery. When they get the body out onto the riverbank they can see that it’s a young man dressed in 18th century clothes, a ruffled silk shirt, silk trousers buttoned at the knee, was he at a fancy dress party? It turns out that he’s well known locally, Orlando has been a bit of a problem at times.

Flavia of course wastes no time in beginning her chemical investigations, all very detailed and I always ask my own resident organic Chemistry PhD guy about the chemistry involved, and it’s always correct.

I think I enjoyed this one more than most other readers. I liked that the relationship between Flavia and her sisters is maturing and becoming more understanding, as it should, and also that given when the story is set – the 1950s – when we still had the death penalty in the UK this book involved a miscarriage of justice, which is one of the reasons that hanging became so obnoxious to the general public. I think sometimes that people forget that several innocent people were hanged back in those more brutal times.

12th, December, edited to add – I noted several incongruous words in this book. Although Alan Bradley lives in the UK and his Flavia books are set mainly in the UK his Canadian origins show through several times in this book. Particularly on page 155 he writes that – On a raised platform, a tall thin man with a bare chest, but wearing suspenders, was swallowing a sword for an audience of two small boys who were fighting over a bag of apples.

That word suspenders is presumably meant to mean what we in the UK call braces or in Scots galluses. Suspenders in the UK are those ghastly looking things that some women use to keep their stockings up – and a certain sort of man finds enthralling! So I did have a bit of a laugh over that little bit of description.