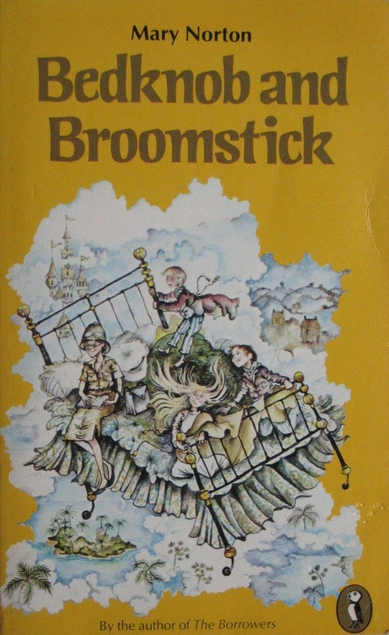 Until I picked this book up in an Aberdeenshire secondhand bookshop recently I had no idea that Bedknob and Broomstick had been written by Mary Norton (of The Borrowers fame). It was first published in 1945 and although I’ve only seen short excerpts of the Disney film Bedknobs and Broomsticks, I think it’s fair to say that it must be very loosely based on the book. It was obviously written in wartime although it doesn’t really come into the story, the three children Carey, Charles and Paul have been sent to live with an old aunt who lives in Bedfordshire. This must have been a normal experience for many children in those days as fathers were off in the services and their mothers were also doing war work. It fits the perfect children’s book scenario, get rid of those annoying parents.

The house is old and square with a large hall and the children are quite intimidated by it. They’re also rather shy of their aunt and the old housemaid, but the garden is wonderful and even has a river running through it. The children have a whale of a time, they’re well behaved and all their days are alike – until they meet Miss Price. She’s an elderly lady who gets about on her bicycle, she’s very ladylike and teaches piano for a living, but in her spare time she’s a bit of a white witch. She’s really just a beginner at it and when the children find her in pain lying on the ground in local woodland it transpires that she has sprained her ankle as she has fallen off her broomstick!

She obviously needs more practice. Miss Price needs the children to keep quiet about her witchcraft, the locals wouldn’t understand, so she puts a spell on Paul’s bedknob so that when he twists it the bed will wheech them all anywhere in the world – or even into the past.

This book is aimed at children over the age of eight – I think I fit that description!

8 thoughts on “Bedknob and Broomstick by Mary Norton”