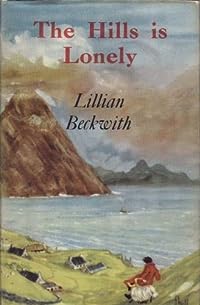 The Hills is Lonely by Lillian Beckwith was first published in 1959, the year of my birth as it happens – yes I have fairly recently celebrated a BIG birthday. I remember that this book was very popular in the early 1970s when I was working in a public library. It has taken me some time to get around to it. My copy of the book is a lovely hardback reprint from 1973.

This book is quite autobiographical as after an illness Beckwith’s doctor recommended to her that she should move to a rural location for the good of her health so she and her husband moved to the Isle of Skye from the north of England. In the book though Lillian Beckwith or Miss Peckwit as the islanders with their soft consonants call her is a middle aged spinster who moves into a cottage belonging to Morag McDugan who answered her advert for accommodation on the island.

Presumably Lillian’s health problems were all of a nervous/mental health nature as her experiences of reaching Morag’s house would have just about killed anyone with physical health problems. Morag’s garden gate is under water when the winter tide comes in so the only way into her cottage is to climb a six foot stone wall which is what Lillian does – in a howling rainstorm.

This is a really funny read, just what I was needing. It reminded me a wee bit of Cold Comfort Farm with its rural location and odd locals. The island and its inhabitants are a real culture shock to Lillian, it’s a spartan lifestyle with a very limited diet it would seem and cleanliness isn’t a high priority for anyone, but the cottages didn’t have mains water and any of the things that we all take for granted.

Despite Skye being supposedly a very strict religious community, it is really only on the surface, the islanders go to church just for the entertainment value – and the gossip. In reality illegitimate children are common as are rushed weddings.

I bought this book at an antiques centre which has a secondhand book section and the woman who served me mentioned that the book title is bad grammar, which it is, but it comes about because the inhabitants of Skye at that time spoke Gaelic as their first language and they translated into English straight from the Gaelic which is very different. It’s one of those pesky languages that has genders and strangely cows are male, and if you want to say that you have a cat you say ‘ the cat has me’ which looking around at some cat owners I would say that is exactly correct!

I’ve gone on to read the next one in this trilogy – The Sea for Breakfast.

5 thoughts on “The Hills is Lonely by Lillian Beckwith”