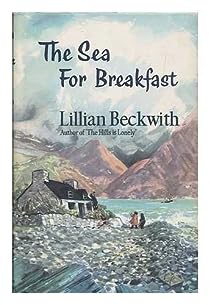 The Sea for Breakfast by Lilian Beckwith was first published in 1961 and it’s a sequel to her The Hills is Lonely. The setting is still Skye where ‘Miss Peckwitt’ is having to move out of her lodging in Bruach as her room is needed for some of the members of Morag her landlady’s extended family. Lilian decides to take the plunge and buys a croft which has been abandoned for some years. The house is in need of a lot of work and her neighbours are happy to help out, and we’re introduced to a few more of the eccentric locals.

Some of the animals are a bit confused and when Lilian takes her in season cow to the bull the cow is perplexed when the bull bends down and sucks at her udder, not at all what was required or expected!

The standard of morality and double standards are not at all what is expected on the mainland of Scotland at this time as can be seen by the excerpt below.

‘You’ll know him, of course?’ she asked doubtfully. ‘He lived outside the village but he goes to my own church regularly.’

‘I know that Netta had a baby by him a little while ago,’ I admitted.

‘Oh yes, indeed. But he’s done the right thing by her. He’s made sure the baby was registered under his own name.’

‘But if he admits he’s the father and wants the baby in his own name, why on earth didn’t he marry the girl?’

The teacher looked at me in shocked surprise. ‘Oh, Miss Peckwitt,’ she hissed reproachfully, ‘he’s a good-living man and he’s hoping to be a missionary some day. He could never marry a girl like that.’

Hilarious in a way but that attitude to women rings so true and of course it was always other women who were the most judgemental of other females – at the same time as revering the men.

This was another good read with laugh out loud moments.