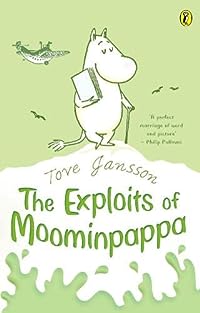 The Exploits of Moominpappa (described by himself) by Tove Jansson was first published in 1952, but I don’t recall ever reading any of the Moomin books as a child, or even to my own boys when they were wee. I thought I should have a look and see what they are about as I know the books are very popular, so when I saw this Puffin paperback in a second-hand bookshop in Edinburgh – I bought it.

I suspect that this one isn’t your usual Moomin book though, I have no idea what age the books were aimed at but this one seems more suited to adults really, certainly not very young children – not that there’s anything untoward in it. It reminded me of the craziness of Alice in Wonderland – Jansson obviously had a great imagination.

The Preface begins: I, Moominpappa am sitting tonight by my window looking out into my garden, where the fireflies embroider their mysterious signs on the velvet dark. Perishable flourishes of a short but happy life!

Moominpappa was abandoned as a youngster on the doorstep of an orphanage which was ruled over by a Hemulen – a very strict personage. Eventually, when he’s old enough he runs away and builds his own house, by a brook and soon he meets Hodgkins who has a houseboat called Oshun, Oxtra, it was supposed to be The Ocean Orchestra but the Muddler painted it and spelling isn’t his strong point and before long they sail off and meet up with various others on their adventure. It was a fun read, but I’m not sure that this one is a typical Moomin book. Have you read any of them?

7 thoughts on “The Exploits of Moominpappa by Tove Jansson”