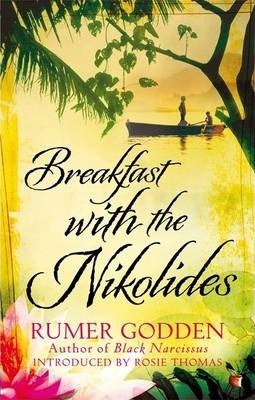 Breakfast With The Nikolides by Rumer Godden was first published in 1942 and it’s one of her several books with an Indian setting, a small agricultural town in East Bengal to be precise. Charles Pool is a farmer there and his estranged wife Louise and two daughters are just about to arrive from France as Hitler’s occupation was imminent. As soon as she gets to India Louise wishes she hadn’t panicked, but really she had no alternative place to go. Charles is a stranger to them all, not exactly welcoming and Louise is appalled by the filth and disease everywhere. It’s not a great place for someone as highly strung as she is to settle.

Like most of Godden’s India books this one seems obviously autobiographical with the young eleven year old Emily modelled on Rumer I’m sure. Emily has a terrible relationship with her mother, mainly because it’s so obvious that Louise dislikes Emily, she never has a good word to say for her and poor Emily is constantly being described as a liar generally abused by her mother. The feeling is mutual though as Emily can see through her mother’s actions. Barbara (Binnie) is the charming younger child, cheerful and light-hearted, but Charles can appreciate Emily.

The Pools put on a front for the sake of society but it’s obvious to everyone that it’s a fraught relationship, not helped by the mother being more immature than the children. She’s suspicious of all Indians too and always thinks the worst of them. Emily even disapproves of the glamorous Nikolides family.

There is some lovely descriptive writing in this book and some blurb on the back from the Observer says: Rumer Godden is a master storyteller, a genius at conveying a sense of place.

I enjoyed it anyway.

3 thoughts on “Breakfast With The Nikolides by Rumer Godden”