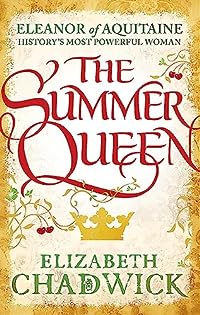 The Summer Queen by Elizabeth Chadwick is subtitled Eleanour of Aquitane, History’s most powerful woman and it’s a hefty read at 478 pages. This is the first book by Chadwick that I’ve read and to begin with I was quite surprised as at times it’s a bit of a bodice ripper. I think on balance I prefer my historical fiction reading to lean more towards the battles fought rather than what goes on in the bedroom or in a secluded corner for that matter. I nearly gave up on it but I will definitely read the next one in this trilogy as I ended up enjoying it.

Eleanor’s mother was already dead when her father went off on a pilgrimage to Compostela and died on the journey. Her father had asked for his daughter to be protected by the King of France and taken into his household. Inevitably as Eleanor is heir to Aquitaine and very rich the king arranges a marriage between her and his son and heir Louis. Eleanor is only about 13 years old, but such was life in those days. Soon Louis and Eleanor are king and queen of France, but what had been an unexpectedly happy marriage turns sour when Louis becomes increasingly more pious and influenced by dubious advisers and hangers on.

As I knew absolutely nothing about Eleanor of Aquitaine I naturally wondered how much of this story was known history and how much research the author had done. Reading the Author’s Notes at the back of the book I was somewhat relieved to see that there is a Select Bibliography of history books mentioned however, when she mentioned using Akashic Records and a psychic perspective to fill in the blanks and explore what happened in the past I was really put off – what nonsense – what’s wrong with using your imagination?!

8 thoughts on “The Summer Queen, Eleanor of Aquitaine by Elizabeth Chadwick”