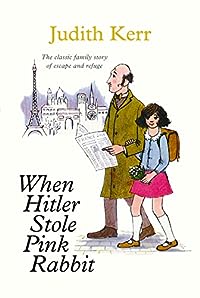 When Hitler Stole Pink Rabbit by Judith Kerr was first published in 1971 but it was only when I was watching the BBC’s Imagine programme which featured Judith Kerr that I thought it was about time I got around to reading it. She’s probably better known as the author of the children’s books The Tiger Who Came To Tea and the Mogg books. I had it in my mind that this book was an account of Judith Kerr’s experiences as a child in Germany in the 1930s – which it is – but I just didn’t realise that it is written from a child’s perspective with Judith being able to recount how she felt as everything in her comfortable life in Berlin changed due to Hitler’s increasing persecution of the Jews. Although it’s autobiographical Judith changed the girl’s name to Anna. In some ways her family was much luckier than most as her father Alfred Kerr had a high profile job as a journalist, he was a theatre reviewer for a Berlin newspaper and was hated by Hitler so he knew that he had to get out of Germany sooner rather than later and didn’t leave it until it was too late as so many did.

A telephone tip off from a friendly policeman telling Alfred that his passport is about to be seized means that Alfred has to leave his wife, Anna and son Max and make his way to Switzerland as soon as possible. He’s gone by the morning and it isn’t long before the family joins him. It’s a frightening time for them all and even in Switzerland they aren’t safe as Nazis holiday there. As the blurb on the back says: This is the start of a huge adventure, sometimes frightening, very often funny, and always, always exciting.

This was a great read and there are two more books in this autobiographical series:
Bombs On Aunt Dainty and
A Small Person Far Away.

I’ve just requested Bombs On Aunt Dainty from the library, so much for me not borrowing any more books!

You can watch the Imagine documentary below.

8 thoughts on “When Hitler Stole Pink Rabbit by Judith Kerr”