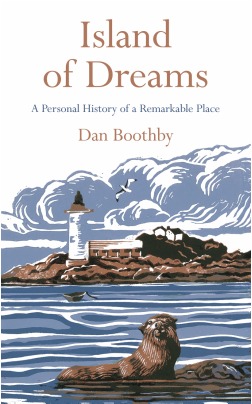 Island of Dreams by Dan Boothby is subtitled A Personal History of a Remarkable Place. The place is the Kyleakin Lighthouse Island (Eilean Ban) which is now used as a base for some of the stanchions that hold up the Skye Road Bridge, so it’s now very different from the remote unspoiled place that was home to the nature writer Gavin Maxwell for years. He was of course most famous for writing books on otters that he had tamed (supposedly) Ring of Bright Water being the first and most popular one in the series, more than a million copies of it were sold. Some fans of the book seem to become quite obsessive and the author appears to have been one of them.

Dan Boothby had always wanted to visit the island and sort of worship at the place where Maxwell had lived and written his books. After years of wandering around the world he jumped at the opportunity to work as a warden there, clearing the island of the worst of the weeds engulfing the paths and such and showing visitors around the place. It must have been a very different experience from Maxwell’s with the Skye bridge looming above and the noise of the cars thumping across it.

Apparently Boothby has always wanted to emulate his hero and become a writer, and this is his first publication. For me it wasn’t a huge success, there are some interesting observations in it, but at times the author seemed to be going out of his way to make himself quite unlikeable. One bit particularly irked me.

Over the summer and autumn I’d remained remote, and had been a rare visitor to the pubs in the villages. I shared the paranoia that many English feel when they move to Celtic lands. We know we’re not really wanted. The English have historical ‘previous’: think of the Highland Clearances or the Welsh Not, think absentee landlords and Famine. The English have been oppressors and usurpers, loud crass and bullying; an occupying colonial force. English imperialism and heavy-handedness, the injustices of the past, still cause Celtic eyes to narrow, mouths to move, and men to bare their teeth. The Scots, the Welsh and the Irish don’t forget, unlike us English, who’ve moved on.

To which I say – it’s very easy to move on if you’ve not been the victim of injustice, or treated like a second class citizen in your own country. Boothby seems to suffer from the breathtaking arrogance that is thankfully a bit rarer nowadays, but as an English friend of mine who has lived in Scotland for many years said to me. The only English people who have a problem in Scotland are those who do the English thing – by which he meant throw their weight around and assume that they are right about everything and expect Scots to change their culture to suit them.

So as could be expected, Dan Boothby moved on at the end of his Scotland stint, no doubt thinking he knows it all now, despite the fact that he thinks we’re all Celts, he has ‘done Scotland’.

I enjoyed Gavin Maxwell’s writing as a youngster, but I was never happy about him keeping what should have been wild animals as pets and remember thinking how stupid he was when one of them gave him a very nasty bite and he was absolutely furious with it for being so ungrateful!! But anyway, if you were keen on the Maxwell books it might be better not to read this one, they do say that you should never go back and it might be better if you keep your memories of this island as it was back in the 1960s before there were cars thundering overhead.

If you’re interested in viewing the 1969 film of Ring of Bright Water starring Virginia McKenna you can see it below.

4 thoughts on “Island of Dreams by Dan Boothby”