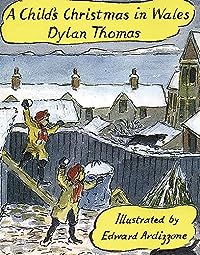 A Child’s Christmas in Wales by Dylan Thomas was one of those books that I had somehow missed, it has been a bit of a tumbleweed moment for me and I’ve been meaning to rectify things and actually get a copy of the book for years, especially as my pal Joan has always re-read it at Christmas. Yesterday when I saw a lovely wee copy of the book – illustrated by Edward Ardizzone – in a secondhand bookshop in Edinburgh, I snapped it up, for all of 99p.

Despite (or maybe because of) the fact that A Child’s Christmas in Wales bears no resemblance to my own experiences of childhood Christmases, I found this to be an atmospheric and fun read. The fun comes in the shape of the aunties and uncles who form part of the family Christmas memories.

Auntie Bessie, who had already been frightened twice by a clock-work mouse, whimpered at the sideboard and had some elderberry wine. The dog was sick. Auntie Dossie had to have three aspirins, but Auntie Hannah, who liked port stood in the middle of the snowbound back yard, singing like a big-bosomed thrush.

Beautifully written as you would expect from a poet, for me this teeny wee book was more like a glimpse into another world, so completely different was it from the 1960s Christmases that I experienced in Scotland, which were very quiet affairs with (and I know you’ll never believe this) NO SNOW. There was no carol singing – apart from at school, Christmas Day wasn’t even a holiday in Scotland until the mid 60s I think, and we concentrated on Hogmanay/New Year for our neighbourly and family get-togethers. In the decades since then we’ve caught up, due completely to consumerism and advertising I think.

You can see the Edward Ardizzone illustrations here.

A film was made based on this book and I intend to watch it in an effort to try to get myself into the Christmas mood, however this year it will take nothing short of a miracle to do that!