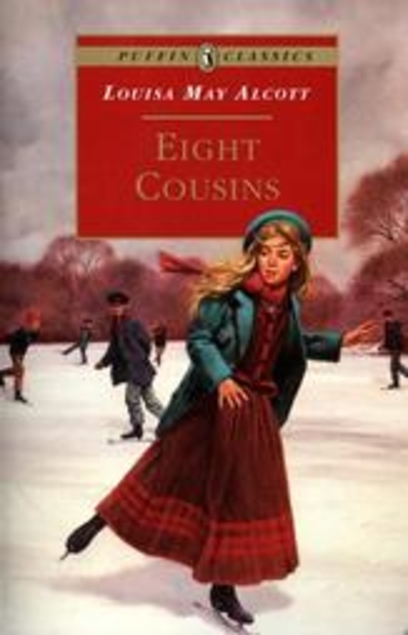 I loved reading the Louisa May Alcott books that most girls read when they were 10 or so, when I was that age anyway. I’m not sure how popular they are with youngsters nowadays, but back then I was under the impression that she had only written, Little Women, Good Wives, Little Men and Jo’s Boys. So when I saw some bloggers mentioning Eight Cousins over the years I thought it was one I’d like to get a hold of, but I never did trip over a copy in a secondhand bookshop. I only resort to the internet for books in desperation.

So how lucky was I that my blogpal Jennifer @ Holds Upon Happiness sent me a copy in a parcel of books that she sent me as an unnecessary but much appreciated thank you, especially given the price of postage nowadays?

Anyway, to the book. Eight Cousins was first published in the US in 1875. As in most children’s novels down the ages both of Rose Campbell’s parents are dead and she’s sent to live at the ‘Aunt Hill’ with six aunts and seven boy cousins. As you can imagine Rose is very despondent at the recent loss of her father, and her new home consisting of so many elderly aunts unused to girls isn’t really what she needs to comfort her. The aunts in turn feel that Rose isn’t like any other child they’ve known and they feel like they have been given the care of “a very low-spirited butterfly”.

Even being allowed to poke into all the rooms, cupboards and chests in the old mansion hasn’t perked Rose up at all. The invitation to Phebe another girl Rose’s age to come and play with her has been a failure, just as well really as Phebe seemed to be a bad influence.

Just when everyone was beginning to worry about Rose’s health and one aunt was predicting her early death, Rose is saved by her Uncle Alec’s attention and being able to romp around and have fun with her seven boy cousins. But when Rose regains her health and strength it’s the turn of her character for some attention from Alec, and although Rose has been left comfortably off with the death of her father Alec suggests that Rose might do worse than to study the art of housekeeping, a womanly accomplishment that no girl should be without.

So begins Rose’s domestic education with each aunt teaching her the ins and outs of their own accomplishments. It’s not exactly what Rose had hoped to be learning but the tasks set by the aunts and the time they spend with Rose are sources of pleasure for all concerned. Her male cousins make sure that Rose has plenty of fun which some of the more snooty members of their society might not approve of and in turn Rose has a hand in improving her cousins.

Eight Cousins is 145 years old now and was aimed at young girls who are now long dead, but really the exploits of the children in the book are there to show right from wrong morally – which doesn’t change. I think this sort of book is what taught me to be a decent human being, well a mixture of that and Scottish Calvinism, although looking around I suspect that being a decent human being doesn’t have much cachet nowadays!

8 thoughts on “Eight Cousins by Louisa May Alcott”