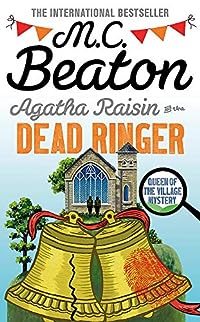 I decided to read Agatha Raisin and the Dead Ringer by M.C. Beaton as a bit of a tribute because the author died on the 30th of December, coincidentally the same date my mother died, but 20 years later. Yes that did make our Millenium celebrations a bit of a damp squib.

Anyway – the book. This one was published in 2018 and it’s the second last book in the Agatha Raisin series which I must admit I had given up on as they had become too samey for me, I hadn’t read any since 2013. They are definitely light and frothy reads, very much tongue in cheek I would say.

In this one the Cotswold village of Thirk Magna is about to be visited by the very handsome local bishop and the bell-ringers are planning a special welcoming peal of bells in his honour. The bell-ringers are a mixed bunch of people including a couple of eccentric twin sisters, a lawyer, a vicar’s wife and a teacher, but Agatha is interested in the place because a local heiress had disappeared some years ago and she thinks she can solve the mystery which had baffled the police. It isn’t long though before the bodies begin to pile up and Agatha herself is targeted.

Entertainment Weekly says: ‘Agatha is like Miss Marple with a drink problem, a pack-a-day habit and major man lust.’

And The Telegraph said: It’s said of Agatha Christie that she’s given more pleasure in bed than any other woman, but M.C. Beaton is matching her as a prolific purveyor of cosy whodunits perfect for pre-lights-out reading.

But there are more serious aspects in these books with a vicar’s wife who is stuck in an abusive marriage and of course having no way out apart from making herself homeless.

I suspect that as the Agatha Raisin books are so popular Little,Brown will continue with them being written by someone else in M.C. Beaton’s style.

2 thoughts on “Agatha Raisin and the Dead Ringer by M.C. Beaton”