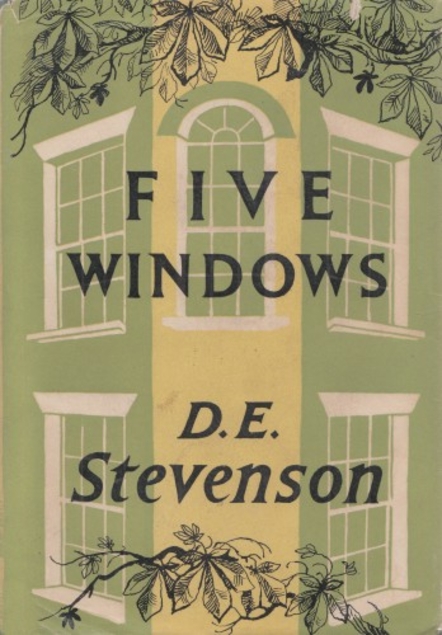 Five Windows by D.E. Stevenson was first published in 1953, but it has been reprinted since then.
I enjoyed this one although I can’t say that it’s my favourite by the author.

I really like the idea of a book with five sections, each one beginning with a description of the view from the window from the room where the narrator David is living. Through the actions of other characters that we meet David learns some important life lessons.

David is the only child of the local minister and his much younger wife, they live in Nethercleugh in the Scottish Borders, it’s a very quiet rural location and we follow his career from the age of nine until his early 20s.

The first window view is from his childhood bedroom window and “looked out over the garden to the bridge and the hills.”

The setting changes to Edinburgh when he starts secondary school and lives with his uncle.

The view from the second window “looked out on a chequer-board of gardens, each separated from its neighbour by a solid stone wall covered with ivy.” David’s two best schoolfriends are very different from each other and he allows himself to be led by one of them, culminating in David moving to London at the end of his schooldays.

The third window is London and it begins: The wall towered up some thirty feet from my window: It was of dingy brick and there was no break in it except for an iron ventilator.” The boarding house that he rented a room in was ghastly, filthy and the food provided was awful, but worse than that was the other boarders. But this was a steep learning curve for David, he learned a lot about people before he made his escape, for me this was the darkest section of the book, but maybe it’s through strife that we learn the most.

The description of the fourth window view begins, “My window looked out on to roofs of all shapes and sizes sloping in all directions: upon jutting gables and hundreds of chimney-pots.” From an attic flat David has real freedom for the first time, a place of his own but it’s not easy as he has to count every penny. This section is much happier as until now David’s life was far from one he had imagined for himself, and it begins to go in a more hopeful direction.

The fifth window was “dirty and we could not see through it, so I opened it from the bottom and we looked out …. Now that the trees had been felled we could see for miles: we could see meadows and fields: we could see hedges with the green tint of spring upon them.”

I liked this book but it has a few preachy Christian passages in it which don’t appeal to me. It has a lot of similarities with O. Douglas books with the main character home-making and descriptions of interior decoration – and the preachy bits. But I do love the idea of the descriptions from the windows as whenever you walk into a room of a house that you think you might end up living in the first thing most people do is walk over to the window to see what the view is like.