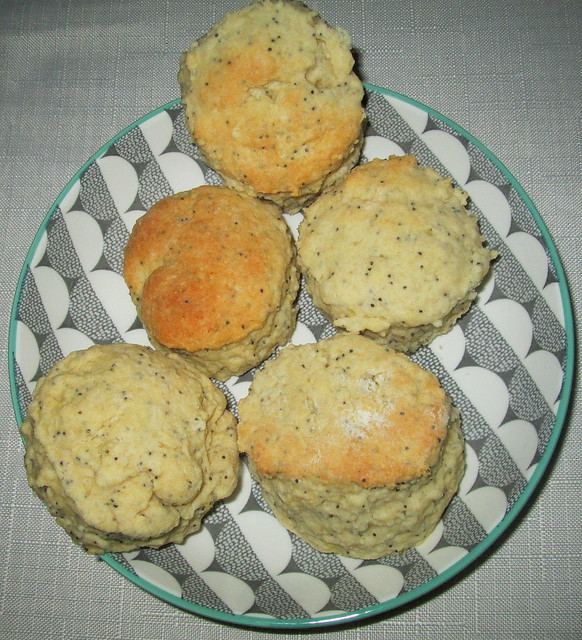 I’ve not had a lot of success with my scone baking in the past, in fact they could be used as hockey pucks as they are generally so solid and dry but when a friend of mine raved about lemon and poppy seed scones from a nearby tearoom I decided to have a bash at them. Jack thinks that the browner scones looked overdone, I think they were supposed to be paler but they all tasted fine. I gave some to a friend and she says they tasted even better toasted – it enhances the lemon flavour – I’d never thought of toasting scones before.

I found a recipe online, but tweaked it a wee bit by adding a few drops of lemon essence to the lemon juice as for me there’s no possibility of something tasting too lemony. I’ve baked these scones twice now and they’ve worked perfectly, but I’m in two minds about the poppy seeds. They don’t add any flavour I believe but obviously add texture. They have a tendency to get stuck in your teeth though. I happened to have a packet of poppy seeds anyway but when they are finished I don’t know if I would bother buying more, I might prefer the scones without them. The ingredients below make 20 scones so you might want to halve the quantities.

Mix the self-raising flour, margarine, sugar, poppy seeds, lemon juice and lemon essence in a bowl and rub together until the mix resembles fine breadcrumbs. Then add the eggs and milk and mix to a dough.

Tip the dough out onto a floured surface and roll out to a thickness of 4 cm or 1.5 inches, cut into rounds using a 70 mm/ 2.75″ (ish) cutter. Put them onto a baking tray. Brush with milk ( I missed this bit out as I used my pastry brush for a DIY project a while ago!)

Delicious with butter but for a super lemon experience why not try lemon curd.