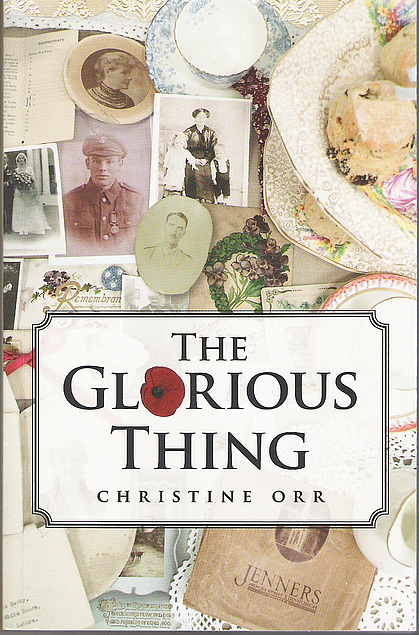 The Glorious Thing by Christine Orr was first published in 1919 but was re-published by Merchiston Publishing in 2013. I must admit that I had never even heard of Christine Orr until I visited the Writers Museum in Edinburgh earlier this year. The museum is mainly dedicated to R.L. Stevenson, Robert Burns and Sir Walter Scott but there are some mentions of other Scottish authors such as Muriel Spark and Christine Orr, there is a small display case featuring some of her books. I’m quite ashamed that I had never heard of her, she apparently wrote 18 novels, was also a poet, theatre director, became head of the BBC’s Children’s Hour in 1936 and was instrumental in founding the Edinburgh Festival. Sadly it looks like this book is the only one which has been reprinted so I don’t think it will be very easy to collect the other 17 novels. Although The Glorious Thing is described as being a war novel, it’s really mainly from the Home Front within an Edinburgh family.

David Grant is back home in Castlerig not far from Edinburgh. He had spent two years in the trenches before he received a wound to his spine which led to a time in hospital that he found even more horrific than life in the trenches. But he isn’t happy, he feels weak, has trouble walking, his nerves are shattered and he feels depressed despite the fact that there’s a job waiting for him as a junior partner in his uncle’s law firm, and he has no money worries.

While visiting an art gallery with his sister Minnie, David’s attention is drawn to a young untidy woman, it’s her laugh that attracts him and later on he meets up with her and her large family of sisters. They are all living with their uncle as their parents are dead and I had to feel sorry for the man as the sisters are a fairly argumentative lot.

This is a very good read which focuses on the changing roles of women, politics, social history, atheism (very unusual for this time I think), religion and of course romance with quite a bit of humour too. There are some darling children – was there some sort of unwritten rule that Scottish female writers of the time had to conjure up cuties?

I really hope that in the future some more of Christine Orr’s books will be published. This one was published by Edinburgh Napier University and the proceeds supported Poppyscotland and Scottish Veterans Residences.

The back blurb says: ‘This book is a revealing snapshot of ordinary Edinburgh lives during an extraordinary time.’

8 thoughts on “The Glorious Thing by Christine Orr”