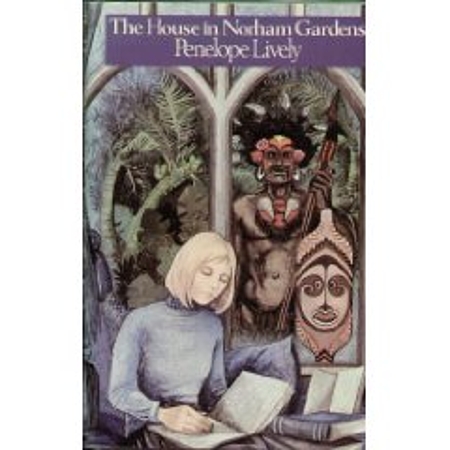 This is my second book from my 20 Books of Summer list.

The House in Norham Gardens by Penelope Lively was first published in 1974. The setting is Oxford, a large rambling house at number 40 Norham Gardens, where 14 year old Clare Mayfield lives with her two elderly aunts. The 19 rooms in the house are stuffed with artefacts, nothing has ever been thrown away and the attic even has trunks full of her great grandparents’ clothes. Clare’s parents are dead and she has more or less become the carer for her aunts who are becoming quite frail. In the past the aunts had taken a lead in Oxford academic society and they have high hopes for Clare’s future which seem well-founded as Clare is a good scholar. However when Clare finds a strangely painted tribal shield in the attic it somehow preys on her mind. It must have belonged to her great-grandfather who had been a famous anthropologist. A combination of the shield and the money worries of running the household on a shoestring culminate in her schoolwork going to pot.

The aunts had previously agreed to having a lodger to help pay the bills and Maureen adds quite a bit of humour to the book. But more money is required and a young student of anthropology from Uganda moves in to the house too. John Sempebwa becomes a good friend as Clare shows him around Oxford and they visit museums, one of which exhibits tribal art.

This is a really good read and considering it was written 46 years ago it was way ahead of the times as it deals with British colonialism and the plundering of often sacred objects from other countries and cultures, something that academics are now arguing about and often unwilling to give up.

This book is set in winter and if I had realised that I would probably have saved it to read in winter, near Christmas maybe. It seems that Oxford suffers freezing cold and snowy winters. Poor Clare was often battling against snow and ice while on her bike. It helped cool me down during our recent mini heatwave.