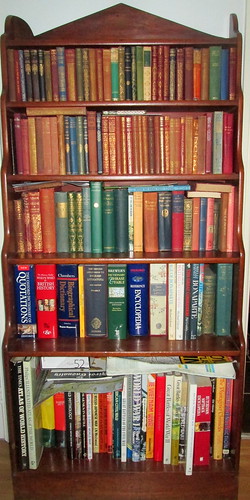 This week Bookshelf Travelling in Insane Times which is a meme which was started by Judith at Reader in the Wilderness, features a photo that Jack took of what was his father’s bookcase, I suppose it was his mother’s too but she ‘popped off’ first so it’s known as Dad’s bookcase. Quite a few of the books, mainly the smaller ones in the top shelves came with the bookcase. I’ve read most of those ones. If you click on the photo and click again it will enlarge so you should be able to read most of the titles.

I bought the small leather bound Collins copies of Shirley and Wuthering Heights on the top left shelf, for all of 75p each, admittedly decades ago though. Elizabeth and Her German Garden was a more expensive £1.50. I bought this one just because it looks lovely but it turned out to be a real treasure internally. It doesn’t even have Elizabeth von Arnim‘s name in it. I bought this pre-Google and it was ages before I discovered who had written it.

Around the middle of the top shelf A Child’s Garden of Verses by RLS has an inscription in it – Margery from Jack Dec. 1916. They were my Jack’s grandparents. I think this must have been a pre-wedding gift or maybe even an engagement gift. Another RLS book is Edinburgh, which I’ve just realised I bought again a few years ago, but this one is inscribed to Margery from S – something illegible – Auld Reekie (that is a nickname for Edinburgh) 14th Sept. 1911. Lest Ye Forget. That’s a mystery that’s never going to be cleared up!

On lower shelves there are lots of classics, Thomas Hardy, John Galsworthy, George Eliot, Kipling, Turgenev to name just a few, and there are quite a few volumes of poetry.

The lowest shelves house some of our history books, most of which are Jack’s and reference books which I still use. We have a lot of bookcases, but this one is definitely my favourite.