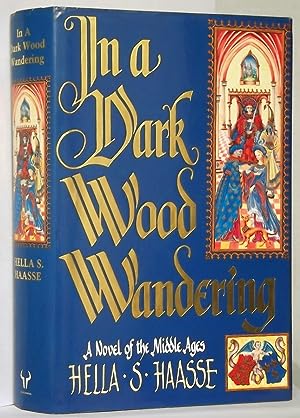 In a Dark Wood Wandering by Hella S Haasse was first published in Dutch in the Netherlands in 1949 but wasn’t published in English until 1989. It was one of my 20 Books of Summer and although I finished it in August I didn’t manage to review it then. The setting is 15th century France during the Hundred Years War. The French King Charles VI is not a well man, described as being mad but he has periods of lucidity over many years. His wife Queen Isabeau is in charge of things for most of the time and she manages to keep her husband isolated, even from his brother Louis d’Orleans. Isabeau hates Louis wife Valentin and after Valentin gives birth to a son Isabeau turns everyone against her, accusing Valentin of being a witch and causing the king’s illness. For her own safety Valentin has to leave the court. Louis isn’t really interested in power but given that he’s the king’s brother he can’t help being involved in the power struggle between the dukes of Burgundy, Berry and Bourbon.

Again and again Louis d’Orleans’ actions show that he isn’t cut out for leadership anyway, poetry is his favourite pastime and he has plenty of time to compile it when he is taken for ransom by the English after the Battle of Agincourt and spends 25 years as a prisoner in England.

This book is 574 pages long and is a great read. Over decades the book was translated by Edith Kaplan, Kalman Kaplan and Anita Miller. The writing is really descriptive, such as the scene before the Battle of Agincourt:

The moon hid behind clouds; a fine, even cold rain fell. There was no wind, but the raw damp of the long night seemed far less bearable than a dry cold. On the muddy plain the French army stood with its vast camp of tents: hundreds of bonfires smouldered in the dank mist. Torches flashed like comets through the darkness. Flags and banners hung limply; from the pointed tops of the tents water trickled down the gold and silver escutcheons.

If you want to read a much more detailed review of this book have a look at Helen at She Reads Novels thoughts here.