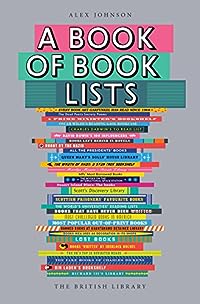 A Book of Book Lists by Alex Johnson is an enjoyable read, the sort of book that you can dip into at any point and find something to entertain you. There are all sorts of book lists in it and surprisingly (to me anyway) it begins with Bin Laden’s Bookshelf. There’s no light reading, it’s all politics, religion and war, three things that any sensible person avoids – in my book.

The musician Art Garfunkel has on his website a list of every book that he has read since 1968, I wish I had been so far-sighted to do that too.

There’s Oscar Wilde’s Reading Gaol Bookcase, he was eventually allowed books during his two year sentence. Johnny Depp should have learned a lesson from Oscar and avoided a libel court case.

Those are just a small percentage of the sections in this book which also explains the work that goes into the book collections that appear in a TV series such as Sherlock Holmes or in Star Trek films. People pause the action so they can peruse the books so they have to be authentic.

I feel that Alex Johnson is probably busy writing a sequel to this book right now as during the lockdowns anyone with an interest in books has been spending quite a lot of time with head cocked to the right and nose close to the TV set, trying to read the titles of the books on the many home bookshelves of the various experts and politcians on the news. Or is that just Jack and myself?

This would be a good gift for a book lover, but I borrowed it from the library.

4 thoughts on “A Book of Book Lists by Alex Johnson”