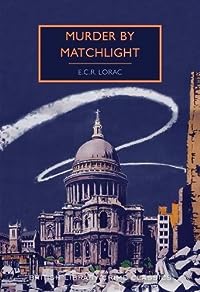 Murder By Matchlight by E.C.R. Lorac was first published in 1945 but was reprinted by British Library in 2018.

It’s London 1945 and this story begins in a very dark Regent’s Park where 30 year old Bruce Mallaig is pleased to be, pre-war he wouldn’t have been able to visit the park after hours, but now there are no railings and locked gates to keep anyone out, the metal railings have been removed to be melted down to make aeroplanes (supposedly a morale/doing your bit thing but in reality they weren’t used for the war effort) but it seems that the park might be the venue for clandestine meetings. A sudden flare of light from a match shows Bruce that there are two men near him and in no time one of them has been murdered, knocked on the head. But Bruce hadn’t heard anything at all.

Chief Inspector MacDonald is heading the investigation and it turns out to be a difficult one as even the murder victim’s identity is a puzzle.

These British Library reprints can be a wee bit hit and miss but I really enjoyed this one with its very atmospheric wartime setting and unusual characters.

6 thoughts on “Murder By Matchlight by E.C.R. Lorac”