The fifth of December is Saint Nicholas Day which is the day that Dutch people traditionally celebrate their Christmas, so in honour of it I decided to bake some Dutch spice biscuits, or Spekulaas as they are called in the Netherlands. I have a few different wooden biscuit moulds, but decided just to use the Saint Nicholas one and his helper Zwarte Piet (Black Piet). Then that was all taking far too long so I gave up and just used cookie cutters after doing a few. I did find it very easy to get the dough out of the moulds though, the trick is to use a pastry brush to dust down the inside of the mould and tap off the excess, then there’s no problem with the dough getting stuck in there. Yes some of mine have been left in a wee bit too long, but I really like slightly burnty around the edges biscuits – honest! 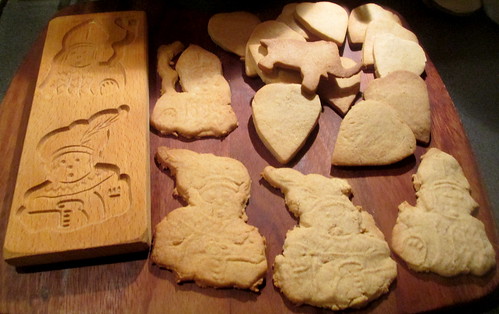 Rub the flour, spices and butter together until it resembles fine breadcrumbs. Add the sugar and mix together, then make a well and add in the beaten egg. Mix together into a dough and knead into a ball. Flour your worktop/pastryboard and roll out the dough to about a quarter of an inch if using cookie cutters. Bake in the oven at 180 Celsius for 12 to 15 minutes. Gas mark 4. 360 Fahrenheit. Keep an eye on them as they may bake faster than that.

You can play around with the spices, maybe adding ginger too or adding more of the spices than the recipe calls for, depending on your own taste. These spices always shout Christmas to me.