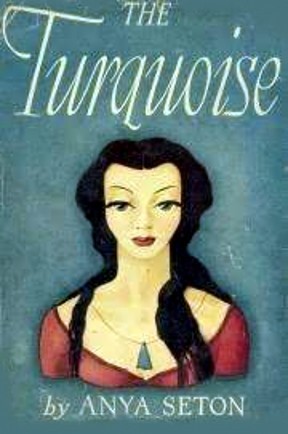 I think it took me longer to read The Turquoise by Anya Seton than War and Peace or Wolf Hall, and I didn’t enjoy it nearly as much as either of those ones – and it only has 352 pages. For me the first half of this book really dragged, so I only read it at bedtime instead of during the day too as I do with books that I am really engrossed in. The book was first published in 1946.

Doctor Andrew Cameron is an estranged Scot living in New Mexico where he has travelled to after a row with his aristocratic father back in Scotland. He marries a young Spanish woman and has to stand by helpless as she bleeds to death after the birth of their daughter. The Calvinist doctor doesn’t want to call his daughter after a Catholic saint, he comes to a compromise to please his dying wife and calls her Santa Fe after the place they live. He will call her Fey. Seven years later Andrew dies while on a call to help another doctor. It’s a blow to his own patients, but they had grown to love him and one family happily took Fey into their own family, especially as it meant that they took all the doctor’s furniture and belongings too.

When Fey reaches a marriageable age she’s not interested in settling down to the life that the other young women are happy to live, she longs to be rich and have an easy life. But when Terry, a travelling medicine man comes to town she’s captivated by his charm. A quick and possibly illegal marriage follows, but of course Terry isn’t going to hang around long, the pair travel to New York City and in no time Terry has abandoned Fey.

That doesn’t hold Fey back though and she ends up marrying a very rich man, but when Terry appears on the scene again it can only lead to disaster for them all.

The second half of the book was a bit more interesting but it didn’t quite hit the spot for me anyway, despite plenty of references to Scotland and Fey’s inherited Highland ‘second sight’. Fey isn’t a very likeable character so that was a problem for me.

I still have Anya Seton’s Katherine to read, I hope it’s more enjoyable than this one. I must say though that the author was good at Scots dialect dialogue, I wonder if she got soneone else to write those parts for her. Seton is of course a Scottish surname so possibly there was Scots blood somewhere in her background.

10 thoughts on “The Turquoise by Anya Seton”