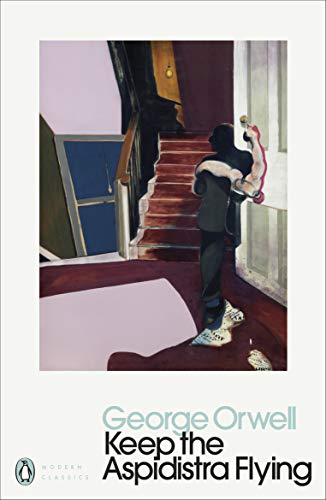 I was really happy to see that Keep the Aspidistra Flying by George Orwell had been published in 1936 because it’s one of his books that I hadn’t got around to reading. However, I found it to be quite a depressing read although it’s obviously well written.

Gordon Compstock is a 29 year old poet, he has already had a volume of poetry published, but he doesn’t realise that it was really his wealthy friend Ravelston who was instrumental in getting it published, only 153 copies were sold. He had previously had a ‘good’ job in an advertising agency but had given it up as he hated the whole industry. His boss says he can come back if he changes his mind, but Gordon really doesn’t want to be part of the rat-race and commercialism.

His job in a second-hand bookshop fits in with his ideals, but he’s earning a lot less than he was and living in deep poverty, often not having anything to eat all day, especially towards the end of the week as his money has run out. He has had to ‘borrow’ money from his much older sister Julia, despite the fact that she’s really poor herself and works in a tea-shop. She has been brought up to put her brother first though, being the son of the family has meant that all the family’s efforts have been put into him, including a private education which might have been a big mistake as his schoolfellows realise he’s poor – and boys will be boys.

He has been in love with Rosemary for two years, but rarely sees her due to a lack of money. He won’t have Rosemary paying her half of any outings or meals out, that would be too shameful to him. They can’t visit each other in their rooms as their landladies don’t allow that. With his decent clothes in the pawn shop people avoid him, thinking he’s a tramp. As it’s the Depression there are plenty such about. Gordon almost wishes that there would be another war.

Gordon squinted up at the leaden sky. Those aeroplanes are coming.In imagination he saw them coming now; squadron after squadron, innumerable, darkening the sky like clouds of gnats. With his tongue not quite against his teeth he made a buzzing, bluebottle-on-the-window-pane sound to represent the humming of the aeroplanes. It was a sound which, at that moment, he ardently desired to hear.

He lives in hope of getting a cheque from a publisher that he has sent poems to and when an American magazine does send him $50 for a poem Gordon is ecstatic. The dollars equate to £10 and some shillings!! Gordon promises himself that he will keep £5 of it to give to Julia but he ends up going on a disastrous boozy bender and ends up in clink overnight.

Like many an artist before him Gordon realises that he can’t afford his scruples, it’s time for him to grow up and earn his £5 a week and join the rest of society. He even decides he must get an aspidistra, they seem to haunt him! They were apparently the mark of a respectable and aspirational middle-class life. Rosemary isn’t convinced.

Everyone rebels against the money-code, and everyone sooner or later surrenders. He had kept up his rebellion a little longer than most, that was all.

It would seem that this is a very autobiographical novel which is really sad as presumably some of the humiliating situations that Gordon experienced actually happened, or Orwell observed.