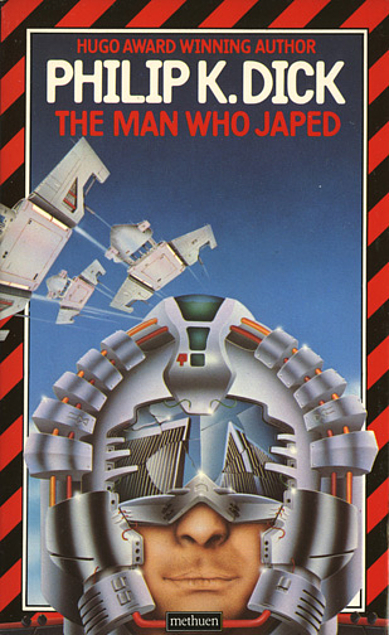 The 1956 Club is a meme hosted by Simon at Stuck in a Book and Karen at Kaggsy’s Bookish Ramblings.

The Man Who Japed by the science fiction writer Philip K. Dick is such an echo of the time it was written in – 1956. The year is 2114 but there had been a devastating nuclear war in the 20th century. General Streiter had headed up a revolution in 1985 and the society he formed is strict and puritanical, named Moral Reclamation (Morec). Neighbours are encouraged to spy on each other, sex is more or less outlawed, certainly outside marriage and there are weekly denunciations in apartment buildings with people being accused of ‘vile enterprise’ which was generally sex. But there are also punishments for using very mild swear words such as damn. There are also robot spies.

There are several other planets where people strive to produce food and there’s a rehabilitation planet which people who don’t toe the line are sent to. There’s a museum to the 20th Century where the most popular exhibit is a 20th century house, the exhibit is titled The Age of Waste and people are mesmerised by the opulence of it all.

Allen Purcell lives in Newer York with his wife Janet, they feel lucky to have a teeny room to themselves, inherited from Allen’s family. The bathroom is communal so you have to queue up for it in the morning. But Allen has an important job and is later given the position of Director of Entertainment and Propaganda. The statue of General Streiter has been vandalised and has been hastily boarded up, but it’s rumoured that the few people who saw the damage had laughed at it, it’s the beginnings of revolution.

As this book was written in 1956 the American author was obviously heavily influenced by the McCarthy era which was just beginning to break down by then. I’m sure if he had written it ten years earlier Dick would have been hauled in front of some sort of committee and accused of Un-American Activities and would have been lucky to come out of it with a viable career as publishers would have been too scared to touch his books.

It seems that revolutions always begin with the statues!

This was an enjoyable read, and I always find it amusing that science fiction dates so much faster than any other type of writing. It was funny that despite the fact that there is interplanetary travelling in this book, if you want to make a phone call you’ll have to use a phone in a street phone box.