Dimsie Moves Up by Dorita Fairlie Bruce is the second book in the Dimsie series which I started reading recently. It was first published in 1921 but my copy dates from 1950. These books were obviously very popular as this book was reprinted eight times within those years.

In this book Dimsie is unexoectedly moved up a form along with several of her friends, with new girls arriving those who had done well academically the previous year need to move up to make room for them. Some of the older girls in the new form make Dimsie and her friends promise not to give flowers to any of the teachers. It’s something that none of the younger girls had even thought of doing. It’s explained to them that some girls go through a phase of being soppy over their female teachers or older girls. Nowadays we’d call it having a crush. Dimsie and her friends set up an ‘Anti Soppist Society’ as they don’t want anything to do with that sort of nonsense.

Dimsie Moves Up has quite a lot about games in it, but even if like me you were never keen on PE at school this doesn’t detract from the storyline

Nita Tomlinson isn’t a prefect but she has been made games-captain. Giving someone like Nita any power is just madness, she does her best to make trouble all round, stealing away best friends and generally throwing her weight around. I suppose she’s the sort of character that you love to hate, whereas Dimsie is a lovely girl, nothing startling in the looks or brains department, just a girl with plenty of common sense and kindness. She reminds me a bit of Darrell in Blyton’s Malory Towers series but I must say that I think Dorita Fairlie Bruce was a much better writer than Blyton was, although I loved her books as a youngster.

It has been mentioned before that the name Dimsie is an unfortunate choice, her actual name is Daphne and I’d plump for Dimsie any day rather than that. However I googled dim as in dimwitted and it seems that it was first used in that way in 1934. However another source cites it as being used in US colleges first in 1922, which is still after this book was published. 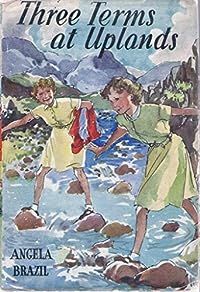 Three Terms at Uplands by Angela Brazil was published in 1945 and it was her second last book before her death in 1947. I think her later books are slimmer than her earlier volumes.

Claire and Colin Johnstone’s parents have been killed in a car accident in Mexico where their father had been working as a mining engineer, so the children are sent back home to England to live with their grandparents. Their young Aunt Dorothy has sailed to Mexico to accompany them back and the children make friends with some of the people on board.

Back in England their aunt and grandparents cocoon them in love and the children eventually settle down to their new life, but times are hard as money is scarce and Aunt Dorothy who had been keen to study art in Cornwall with some talented artists ends up having to become an art teacher to help support the children.

Colin, being the boy is without question sent to the same private school that his father and grandfather had gone to. But when it comes to Claire she’s expected to make do with the local high school as there’s no money for her to go to a boarding school.

A stroke of luck leads to her getting a partial scholarship to Uplands which is apparently a very good boarding school, and so begins her journey from unsure new girl to a more confident personality who helps out with a younger girl.

This was a very quick read, entertaining and so true to life as I laughed (or should I say huffed) when Colin’s education was seen as being so much more important than Claire’s. The exact same thing happened to a schoolfriend of mine in the late 1960s – 70s. Mind you Morag did very well at the local high school along with the rest of us, whereas her brother ran away from his posh boarding school as soon as he turned 16 – and joined the Merchant Navy! 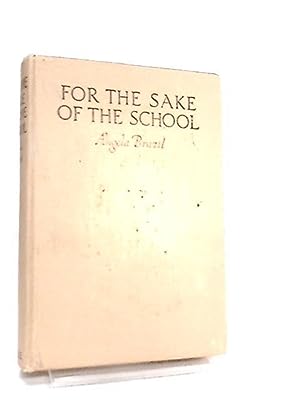 For the Sake of the School by Angela Brazil was first published in 1915 but my copy was published during World War 2 as it has that Book Production Economy Standard logo at the front and although there’s no publication date it was a gift to Rose from Jean for Christmas 1943.

I didn’t read any of these books as a child, I was strictly an Enid Blyton Malory Towers/St Clare’s girl which were obviously written along very similar lines as far as morals and behaviour are concerned. Blyton probably just wrote updated versions of Brazil’s books. I suspect that Brazil was better though.

It begins at a railway station as most schooldays’ stories do (Harry Potter). The girls are on their way to The Woodlands which is in a very rural setting in Wales. The two women who own the school are keen on nature and wildlife and the girls are encouraged to get out into the great outdoors as often as possible. In fact they could be regarded as nature worshipers, such is their enthusiasm.

This year Ulyth (new name to me) is particularly excited because Rona the New Zealand pen-pal that she has been writing to for the last two years is arriving as a new boarder. Rona’s mother is dead and she has had a rather rough upbringing by her father who is a farmer in the wilds of New Zealand. Ulyth who has been looking forward so much to meeting Rona is rather shocked by her appearance and lack of manners. She’s keen to drop her pen-pal but is persuaded to take her on as a work in progress and try to make Rona conform more to what is expected of girls from The Woodlands School.

Trials and tribulations ensue, wrong conclusions are jumped to but as you would expect – all is well in the end. I did find the storyline of this book to be more than a bit obvious, but it was still enjoyable and I can imagine that if I read this as a ten year old I would have loved it. I think most if not all of Angela Brazil’s books are available free from Project Gutenberg.

It struck me a couple of times that Angela Brazil wrote as if she was Scottish, according to Wiki her mother was a McKinnel, so possibly they were originally from Scotland – or she had a Scottish nanny. In part of this book someone says that they “put something by in the dresser” – meaning they put something away in the dresser. Very Scottish.