I’ve had High Wages by Dorothy Whipple on my Classics Club second list for ages, despite the fact that I know so many people have loved it. The thickness of my edition was putting me off I think, unusually for me it’s a first edition which I just about fell over in an antiques shop which only had a couple of books in it, it cost me all of £2, I felt so lucky as I had been meaning to get the book for ages and just hadn’t got around to ordering it.

Anyway, I loved this one which begins with Jane Carter visiting the small town of Tidsley on her half-day off. She works in a draper’s shop in a nearby town but she’s drawn to a notice which has just been put in the window of another draper’s shop. They’re looking for a new assistant and Jane plucks up the courage to go in and enquire about the job. She’s successful, and so begins her new life. There’s no doubting that Jane is ambitious and has a good business mind, and she improves the business for the owner Mr Chadwick, but he is not at all grateful and exploits her financially. That just encourages Jane to long even more to have a shop of her own.

Whipple captures the small town atmosphere so well, with the gossip and snobbery, clandestine relationships and unrequited love. The characters are all so recognisable, and although Jane is a very likeable person, she’s not perfect – and she knows it.

The tale begins in 1913 so it isn’t long before WW1 changes things in the town although it doesn’t play a huge part in the book. I was amused to see quite a lot of mentions of aspidistra plants in this book, especially after reading George Orwell’s Keep the Aspidistra Flying recently.

I’ve only read one other book by Dorothy Whipple – Someone at a Distance – which I did enjoy (twice inadvertently as I had forgotten I had read it some years before!!) I’m sure that High Wages will stay with me much longer. I read this one for the Classics Club. Sadly my 1930 copy of the book doesn’t have the dust cover.

Someone at a Distance by Dorothy Whipple has been read and reviewed by a lot of my favourite bloggers and I’ve always just skimmed the reviews as I knew I wanted to read the book myself – eventually, so I had no idea what it was about really. I did like it, it’s well written and observed but it was the second book on the trot that I’d read about the break up of a long marriage in which the only mistake the wife seems to have made was that she trusted her husband too much.

The North family consists of Ellen and her husband Avery and two children, Hugh and Anne. They’re well off and live in the suburbs, not far from London. Their problems begin when old Mrs North, Avery’s widowed mother decides to advertise for a French companion. Mrs North feels that her son and his family don’t give her the time and consideration that she deserves, a paid companion who will pander to her every whim is exactly what she wants.

Ellen’s one flaw is that she doesn’t seem to realise that her husband is really a carbon copy of his mother. He’s selfish and immature and easy meat for an avaricious French woman. Louise might be younger than Ellen but she’s much more knowing where men are concerned and soon causes mayhem within the family.

This book was first published in 1953 at a time when divorce was beginning to be more common-place, but I found this to be a sad read and I did think to myself as I was reading it that I’d probably read a children’s Puffin book next, in an attempt to avoid the subject of divorce!

One of the best things about travelling around the UK is having the chance to visit different secondhand bookshops, not that there are that many of them left nowadays mind you. However, I did manage to buy eleven books on our recent trip to the Lake District, Derbyshire and Peterborough.

My first purchase was in Penrith:
The Star Spangled Manner by Beverley Nichols – first published in 1928 but my copy is from 1937. It’s obviously his thoughts on America, a place he travelled in extensively. It’s a very nice and clean copy in fact I think it might never have been read.

At the same place I found:
The Sea for Breakfast and The Loud Halo – both by Lilian Beckwith. I’ve never read anything by her, but her books were very popular when I worked in libraries yonks ago. Again the books are in great condition, I love the covers.

Two Persephones were my next purchases – from the great bookshop in Buxton. I could spend all day in there but the old books are a bit pricey. These reprints were very reasonable though:

Somewhere, I can’t remember where, I bought Voices in the Wind by Evelyn Anthony. I used to read her books back in the 1970s but this one was published in 1985.

I bought a few books aimed at children: Pigeon Post by Arthur Ransom, Flight of the Grey Goose by Victor Canning and The Indian in the Cupboard by Lynne Reid Banks.

Over the Mountains by Pamela Frankau turns out to be the last in a trilogy, so I’ll have to track down the first two.

The last two are non-fiction:

The Blessings of a Good Thick Skirt by Mary Russell which is about women travellers and their world.

Lastly I bought a nice old copy of In Search of England by H.V. Morton This book has been reprinted a lot since it was first published in 1927 but my copy is from 1943 – complete with dust jacket.

Not a bad haul I think. Have you read any of these books?

This book was first published in 1953 although it has been recently reprinted by Persephone books. Mine is an old copy, one of my Stockbridge, Edinburgh finds.

I gather that there’s a bit of snobbishness going on about Whipple’s writing but I really enjoyed this one.

Old Mrs North is a wealthy widow with three grown up children, but she’s one of those mothers who thinks she should still be number one in their lives, her husband had spoiled her and consequently she always felt that she wasn’t getting enough attention. As she was always complaining and generally being disagreeable she wasn’t a joy to visit.

Mrs North decides that she wants company and she answers an advert in The Times: Young Frenchwoman desires to spend July, August in English home. French conversation. Light domestic duties… The upshot is that Louise Lanier, a woman whom nobody likes, not even her own parents, if they’re honest, comes over from France and ingratiates herself with Mrs North, it’s easily done, she just has to slag off young Mrs North.

Young Mrs Ellen North is a happy soul and her only real fault is that she is so nice and polite, and after 20 years of marriage to the selfish and spoiled Avery North she is being taken completely for granted by him. But she doesn’t mind as she enjoys doing all the housework and gardening and generally looking after everyone.

Louise is a gold-digger from the very beginning and I imagined her as looking like a young Wallis Simpson. Disaster looms!

Ellen is so sure of her husband that she has become a wee bit complacent and I just longed for her to forget her good manners and throw Louise out. Or as we say in Glasgow – Get tae France – when the more usual four letter F word is being avoided.

Anyway, if you haven’t already read this book you might want to give it a go. As I said at the beginning, Whipple seems to have been denigrated in a Guardian article at some point, apparently Virago wouldn’t publish her and I can’t see why not. So it’s a book about a woman who is happy as a housewife, well we can’t all be career women. In this book Ellen believes in God although Avery doesn’t and there is a bit of religious content, but not much. However I think that might have been enough for some people to take a dislike to Whipple’s writing. Most Brits just don’t feel comfortable when religion is brought into anything. My pet theory about that is that it’s a sort of genetic folk memory which makes us instinctively avoid the subject of religion, as in the past it could have got you into so much trouble. Like being burnt at the stake!

Just a quick one tonight. I’ve been managing to buy a few old books on the internet. So in the past couple of weeks I’ve taken delivery of:

Someone at a Distance by Dorothy Whipple

Susanne recommended The Grand Babylon Hotel and Anbolyn at Cousins Read came up with Edna Ferber as a possible neglected author from the past. I must admit that I hadn’t even heard of her before, so I’m really keen to read some of her work as she was so famous in her heyday. Most of the books are quite old but clean, but the copy of Show Boat is a beauty. It’s a facsimile of the 1926 edition and is pristine and I got it for peanuts. 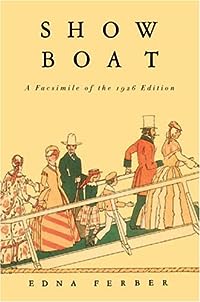 Well I like it anyway. I had been doing so well at not buying books until the new year really. Then somehow I just started buying them again and it has snowballed.

I think it’s a bit like when people go on a diet and do very well at it, until they relax a bit and before they know it, they’re even heavier than they were before they started on the diet.

I’ve had book buying binges recently and I just know that I’ll end up having bought more than 52 books by the end of 2011. So by the time I’ve got through my 2011 reading list from my TBR pile – my book pile will be even bigger.

Why isn’t there a Bookaholics Anonymous? And what would reaching rock bottom be for a book buyer?