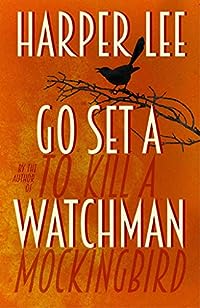 Go Set a Watchman by Harper Lee was of course just published this year. Most readers will know the story behind it I suppose and I was nearly put off from reading it because I had heard that people were saying it was a badly written book, and various other negative comments. Thank goodness I decided to read it and judge for myself.

Firstly, it’s absolute nonsense to say that the book is badly written. I can only assume that people dived down that alley because they knew it had originally been rejected by a publisher. (which book hasn’t been I ask myself? ask the Brontes about their experiences!)

I suspect that Go Set a Watchman was rejected because its time had not come – yet. The subjects dealt with within the story were just too hot for the society of the day. I’m not going to say too much about the actual storyline, as is often the way with my bookish meanders. When it was written it was a contemporary novel, the publishers were obviously happier to publish a historical book which would give them fewer political headaches.

Atticus Finch is 72 years old and crippled with rheumatoid arthritis. Jean Louise has been away living in New York for the last two years, but she has travelled back to Maycomb for a holiday. She has gone by train because Atticus isn’t able to pick her up, the driving would be too much for him, and she’s shocked by the change in him.

But more shocking is the change in his attitudes to other people. He doesn’t seem to be the man that she knew and loved, the man who brought her up to be decent and unprejudiced. Atticus uses the ‘n’ word. The change has come about because there has been a shift in the attitudes of the black inhabitants of Maycomb. Previously they had known their place in the pecking order of life. No matter how hard working and decent they were they were the bottom of the pile, below the ‘white trash’ some of whom weren’t only poor but were more than a wee bit ghastly.

The NAACP have been educating the black people with the result that the old relationships between black and white folks have disappeared. The white elite of Maycomb are very unhappy about the possibility of a change in the status quo. They’re determined to hang on to the power they have and fear what would happen if the black people were seen as equals and had the vote. How could they possibly run Maycomb County, none of them are educated enough to be trusted with a vote.

But things are changing in Maycomb, not only for the black people. The men who were away at war have come back with ambitions of their own, they’ve seen more of life and they’ve brought some of it back with them.

It’s far too simplistic to see Atticus as being racist. If you’re of a certain age you’ll probably have had the experience of rolling your eyes at the archaic attitudes of elderly parents already, but such is life. Jean Louise doesn’t roll her eyes though, she’s a bit more demonstrative. She discovers that her father isn’t the hero she had thought he was, he’s just a human being, which is a massive disappointment to her.

Go Set a Watchman is about changes in society which are painful and dangerous to the people who have held the power and had all the advantages in life. It’s about snobbery too. I’ve long thought that the US is a very snobbish society, much more so than the UK which comes in way down the snobbery league tables in my experience. Where else are people given the tag ‘trash’, just because they’re poor, have a different culture/customs and haven’t been given any opportunities in life?

Atticus does give one young ‘white trash’ man a chance in life and takes him on as his protege. He’s smart and decent and thanks to Atticus has a good job and bright future ahead of him. But he’s never going to be able to get away from that ‘white trash’ tag and he’s certainly never going to be good enough for a Finch daughter to marry, according to Aunt Alexandra and Uncle Jack anyway.

I really enjoyed this book and for me it is of absolutely no interest whether it was written 50 years ago or some other time. It’s a good read.

I’ve been swithering about reading Go Set a Watchman but at last I’ve definitely decided not to read it as I don’t want to sully my experience of reading To Kill a Mockingbird.

If you haven’t already done so you can read the first chapter of Go Set a Watchman here. It’s accompanied by items by Oprah Winfrey, Shami Chakrabarti, Mary Badham (Scout in the film) and Harper Lee’s sister, Alice.

As it happens, Jack had never got around to reading To Kill a Mockingbird, it seems it wasn’t a set book when he was at school, although I must admit that I read it years before it was given to me at school to read.

You can read Jack’s review here.