I’ve been swithering about reading Go Set a Watchman but at last I’ve definitely decided not to read it as I don’t want to sully my experience of reading To Kill a Mockingbird.

If you haven’t already done so you can read the first chapter of Go Set a Watchman here. It’s accompanied by items by Oprah Winfrey, Shami Chakrabarti, Mary Badham (Scout in the film) and Harper Lee’s sister, Alice.

As it happens, Jack had never got around to reading To Kill a Mockingbird, it seems it wasn’t a set book when he was at school, although I must admit that I read it years before it was given to me at school to read.

You can read Jack’s review here. 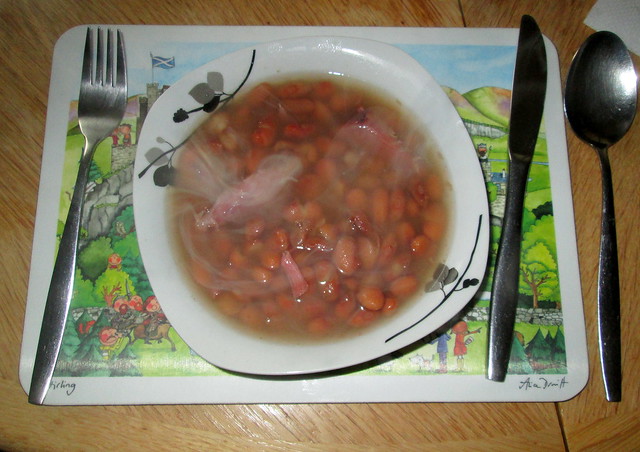 Whilst Peggy was with us she cooked some traditional southern US food. This bowl is full of pinto beans and ham hock or hough as we say in Scotland, it was very tasty. I suppose it’s peasant food but that’s my favourite kind and the weather was cold enough to want winter warmers. If you’re interested you can see a recipe similar to the one Peggy used here.

The photo below is of hoecakes which are made from cornmeal which Peggy had to bring with her as you can’t get it in the shops in Scotland. Again, very tasty, like thick pancakes with a distinctive flavour of corn. You can read about them and see a recipe here. 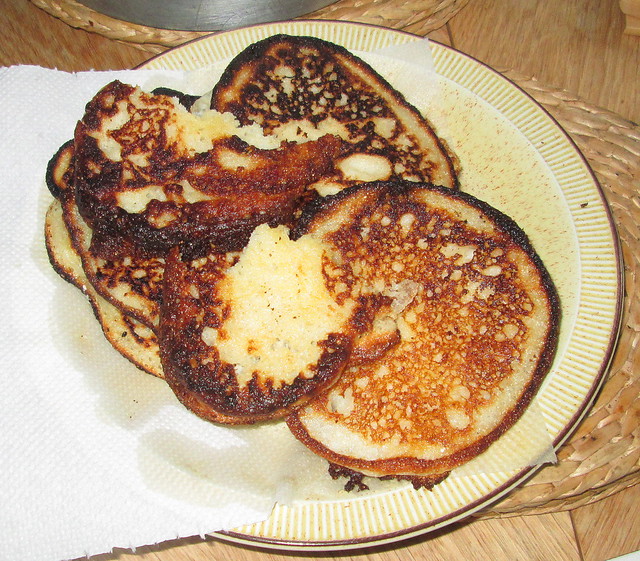 Peggy also brought a tub of grits with her. I had always wondered what grits were, now I know, it looks similar to porridge but again has a corn flavour. I preferred it straight but it can be eaten with syrup, I tried that but it drowned out the corn taste. A lot of southern US food does seem to be very sweet, or has syrup added where I wouldn’t expect it to be, which reminded me of Scout in To Kill a Mockingbird when her lunchtime guest from school asked for syrup for his ham, much to her disgust. She got skelped for that!

I enjoyed watching the BBC documentary To Kill a Mockingbird at 50. I watched it last night and it will be available to watch on the iplayer for another 12 days. The film is 60 minutes long.

Andrew Smith had been hoping to get an interview with Nelle Harper Lee but of course she didn’t oblige him, although her presence did seem to be felt by him as he travelled around Monroeville. She did allow her sister Alice to speak to him and friends and neighbours contributed to the film too.

I found it interesting anyway and hope you like it too.

Judith at Reader in the Wilderness has been blogging about To Kill a Mockingbird recently, and then, as often happens, she discovered that this is a special year for it, the 50th anniversary of its publication. As it is one of my favourite books I thought I would write a wee bit about it.

I first read the book in the summer of 1971, I had just turned 12 and I was in Germany, Bavaria actually, visiting my pen-pal Jutta for the first time. Her English was not great and my German was nearly non-existent then and I was there on my own so it was quite a difficult, lonely visit.

Thankfully, an American had visited the village the year before and had left their copy of To Kill a Mockingbird behind, so I was given it to read. I absolutely loved it although it was so unfair and I hated what happened to Tom, but it is the only book which I have ever got to the end of and started reading again almost immediately.

It’s not only against racism, but about intolerance of anyone who is different. So when Scout begins to mock Walter a dinner guest, the housekeeper Calpurnia gives her a row for it. If people want syrup on their meat and vegetables, it doesn’t make them any less of a person. My mum would have skelped me into the next week if I had behaved like Scout. Boo, the neighbourhood ‘bogey man’ turns out to be the life saver and a good soul, a victim of a tormented childhood. As was Mayella, life wasn’t all wine and roses just because you were white.

The book is a lesson on how to behave towards people who are different from yourself. Treat everyone as you yourself would wish to be treated.

Some years later I saw the film starring Gregory Peck. The whole thing was so well cast, even the kids were great. Then it was a set book in high school, so it was a shock to me to find out that it isn’t taught in Alabama, apparently the excuse is that as it is the only book which Harper Lee wrote, there is no body of work to study. In my opinion To Kill a Mockingbird has more than enough in it to be getting on with.

Growing up in a small town in the west of Scotland in the 60s meant that I personally had no experience of racism, everybody in the town was white. The big problem there is religion with the Roman Catholic church insisting that they be given money to run their own schools instead of using the normal state schools like everybody else, meaning that there is religious segregation, which is not a good thing.

However, during World War 2 my dad was in the Merchant Navy and he had spent 6 months in New York when the ship he was on needed to have work done on it. It must have been between 1939 and 42, before America was in the war and dad had a very enjoyable time there, especially in Harlem because there were lots of street musicians and dancers, which he loved.

So when he was in a diner with one of his shipmates, they were surprised to be asked to leave. The problem was that they had chosen to eat in a diner which was for black people only. They hadn’t noticed that everybody else was black and apparently some of the regulars were upset by their inadvertent intrusion.

When dad told me that story I was just a wee girl and I thought how terrible it must have been for my really mild-mannered dad to be chucked out of somewhere, but they completely understood and after all it was nothing to the way black people were being treated routinely.

Racism caught up with me though when we moved to England in the late 70s and as a Scot I was not exactly welcomed with open arms. My husband worked for a Malaysian company and was treated as very much a second class citizen compared with the Malaysian workers.

On the other hand, as a Scot, when you go abroad you are in danger of being hugged in the street by complete strangers if they realise that you are Scottish. It happens in France, Norway and Holland, something to do with Scottish soldiers at the end of WW2 I believe. It’s a bit of a shock the first time it happens to you.

So racism and bigotry come in all shapes and sizes and there are laws now to help fight against such evils. In Britain it is common to be tormented by idiots if you happen to be a redhead and there is no law against that. So you go through school being picked on and judged because of the colour of your hair and there are even advertising campaigns in which the so called ‘ginger’ person is ridiculed.

Although I was never a Michael Jackson fan, I did agree completely with him when he said: “I’m not going to spend my life being a colour.” Yes, I’ve got red hair or as my mum called it, strawberry blonde.

What a long meander – back to the book – Judith is going to be buying herself a special edition of it which has been published to celebrate the anniversary.

A few years ago I treated myself to the Folio Books edition, their books are always beautiful and come with nice slip covers too.

If there is anyone who hasn’t read To Kill a Mockingbird – do yourself a favour and read it or even just watch the film.

Sorry, I know I was supposed to be writing just a wee bit but I got sort of taken over somehow.