The Guardian review section this week has an article about Dodie Smith’s I Capture the Castle by Evie Wyld in it that you might be interested in reading if you are a fan, you can read it here. I enjoyed the book when I read it for the first time fairly recently – probably I would have loved it more had I read it when I was much younger. I have since enjoyed some of her other books even more.

Apart from reading the Guardian I’ve been busy touring around with Peggy, with Jack doing the driving. You can read her post on Cove here. 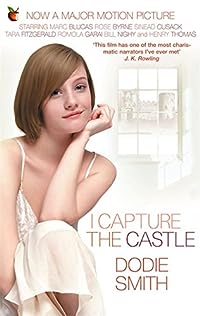 Dodie Smith began writing this book in 1945 but it’s set in the 1930s and people have been telling me that I should read it for at least 30 years so I put it on my 2011 Reading List to make sure that I got around to it this year at last.

I really enjoyed this book and I wish that I had read it when I was about 17, which happens to be the age of Cassandra Mortmain, the narrator. Although Cassandra is supposedly telling the story through her diary which she speed writes in great detail and using her own version of shorthand, it doesn’t read like a diary to me, which is a plus.

Cassandra lives with her beautiful older sister Rose, their schoolboy brother Thomas, a step-mother called Topaz and their father James Mortmain who had written a very successful book years before but had been unable to write anything else after a traumatic incident. They live a very spartan life as tenants of Godsend Castle which has no electricity or running water and in fact they have very little to eat and virtually no clothes because they have hardly any money and no means of earning any. Rose despairs of ever being able to meet anyone and get a life of her own.

Then the Cottons, who have just inherited the castle and nearby Scoatney Hall arrive and it’s all quite Pride and Prejudice-ish. I have to say that the father, Mortmain did annoy me because he seemed to be unconcerned that his family was starving and they had had to sell everything of value. But I suppose he was supposed to have a problem with depression.

I really liked Cassandra and I know that people have thought that she seemed to be too immature for a 17 year old but I felt that she was just right for a young woman who had led a sheltered life in the country and was the product of genteel poverty. It’s a class thing, if she had been brought up in a working class family she would have been more mature because she would have had to leave school at the age of 14 and earn a living somehow.

Cassandra and Rose were in an even worse position than an Austen or Bronte character because they didn’t have the possibility of becoming a governess, which was the only occupation open to women in their position in the past. They were unemployable.

Anyway, that’s all I’m going to say about the story but I can see why this is such a popular book with people, and Joan, I thought of you when Cassandra mentioned the horror of the butcher shop.

I have to admit that like Rose and Cassandra, I inherited a fur coat from an elderly lady although not something as horrific as a bearskin. It’s actually a vintage mink which is about 60 years old and I’m the third owner of it, or maybe even the fourth. It’s not something that I would ever have bought, but when you think about it, mink are so ghastly to all other animals that I can’t imagine what else they were put here for. It takes up a lot of space but I don’t see the point in destroying it now, it’s a historic artefact to me. Obviously Dodie Smith had a thing about fur as she want on to write 101 Dalmations.

I don’t like the film tie in cover which Virago chose for the book, especially when you think of what the cover could have been like. I think Virago covers have gone down-hill recently, I liked the old ones.