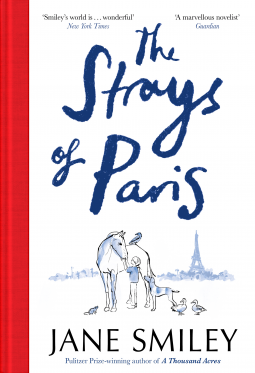 I must admit that I had never even heard of the Pulitzer prize winning author Jane Smiley until she featured in a Guardian Review article which mentioned that her latest book is The Strays of Paris, and luckily it was available on NetGalley, so I requested it and amazingly got a digital copy for review. I’m so glad that I did as this was one of those books that I just didn’t want to end.

It begins with a racehorse called Paras, or Perestroika as is her racing name, she’s an inquisitive horse and when she realises that her stable door isn’t locked she pushes it and manages to walk out of the stableyard and makes for Paris. The previous day she had won her first race, so she knew she had won a ‘purse’ so she took the purse that she saw lying on the ground outside her stable along with her.

She relishes her freedom and all the different smells around her, she’s happy to be able to crop the wild plants that she passes, her very good racehorse diet could get a bit boring. Eventually she reaches Paris where she realises it’s important for her to keep a low profile, but she makes friends with Raoul who is a raven, a mallard duck couple and Frida who is a stray dog since her human who had been a talented homeless street busker had died. Later on a couple of black rats are incorporated into the little stray family, and they can all communicate with each other.

Frida is wary of humans having been well warned by Jacques her human that most of them didn’t like barking dogs, Frida does a lot of grumbling under her breath. All of the animals are sort of semi attached to their own kind. The dogs of Paris bark at Frida because she doesn’t have a human and doesn’t wear a collar. Paras felt different from the other race horses in the stables, but she does miss the warmth as winter in Paris begins to bite.

Some of the human characters who also happen to be loners could also be described as strays, they realise that there is a horse living loose in their neighbourhood and befriend Paras, but it’s Etienne an eight year old boy who does most to get Paras through the winter and keeps her safe from inquisitive policemen. Etienne is yet another stray who lives with his very elderly deaf and almost blind grandmother who is the last of her generation. She worries about what will become of Etienne when she is no longer around.

This is a great read with the animal characters having hopes and ambitions for the future and it has a fairly happy ending, just what I was needing.

Thanks to the publishers via NetGalley for sending me a digital copy for review.

Today I just have a couple of bookish links from this week’s Guardian.

There’s a review by Kathryn Hughes of Frostquake: The Frozen Winter of 1962 and How Britain Emerged a Different Country by Juliet Nicolson which sounds like an interesting read to me.

I enjoyed reading author Jane Smiley’s answers in The books that made me article which you can read here. In her answer to My earliest reading memory she mentions Laura Lee Hope’s The Bobsey Twins. I loved those books as a youngster and I’ve never seen anyone else mention them.

Did you read any of Laura Lee Hope’s books?

I requested from the library Some Luck by Jane Smiley after reading this review by Helen @ She Reads Novels. I had never read anything by Jane Smiley before.

I was a bit downcast when I got Some Luck and saw that it was quite a chunkster, 624 pages to be exact, but the print is big and clear so it really didn’t take me too long to read it. It’s the first novel in a trilogy that will span a century in America and it begins in 1920 ending in 1953. That was obviously a long and eventful time in America but this book is about the small events of family life over generations and how the bigger events affected them.

Mainly it’s about Walter and Rosanna Langdon, a young married couple who are farming in a remote part of Iowa. Walter’s father had advised him not to become a farmer as it’s such a hard life but it was all that Walter ever wanted to do and Rosanna is sure that she will be even better as a farmer’s wife than her mother and mother-in-law are.

We all know what the 1930s were like for farmers in America but they get through it, unlike some of their neighbours.Rosanna has several children but it’s not all sweetness and light and she falls into a depression.

World War 2 means an even deeper difference between their two sons who have always been opposites, with one being very academic and self-centred and the other being a farming home lover interested in improving his crops. I have to say some of the stuff they were putting on crops back then sounds very scary.

This book reminded me a bit of Willa Cather’s One of Us and I had one of those spooky moments when the book sort of echoed what someone had said to me a few days before. A friend had mentioned to me that she had had a friend from America staying with her and her friend had been a real Anglophile, but when she got to the UK she was disappointed to realise that what she had thought of as being her British heritage turned out to be – German. This book had characters realising that the German parts of their heritage had disappeared, their grandfather had given up singing German songs when the US went to war with Germany. It must have been a common occurrence within families of German extraction and they were in good company as the British royal family did their best to shake off those Germanic ties at the outbreak of World War 1. One thing I know for sure and that is that if you have cake for breakfast – that’s Germanic, much as I love cake, I couldn’t face it for breakfast.

Anyway – I’ve meandered as I often do. I enjoyed Some Luck and will be reading the others in the trilogy. Jane Smiley won the Pulitzer prize for her book A Thousand Acres. Have any of you read that one?

Going off at another slight tangent, Some Luck has so many small details of daily life in it that I was reminded of some of the extracts from Christy’s @ A Good Stopping Point ancestor’s (Emma Tilton Richards) journal which begins in 1888 and you can read it here if you’re interested in social history.