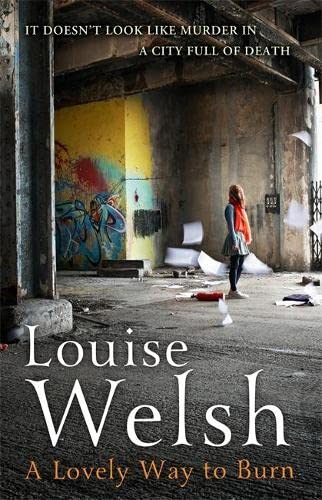 A Lovely Way to Burn by Louise Welsh is the first book in her Plague Times trilogy. I must admit that I didn’t realise this when I started reading it. As I only recently finished reading Station Eleven it was too soon for me to embark on another ‘end of the world as we know it’ book, but I had started – so I finished.

Stephanie/Stevie Flint has just turned thirty and has been living in London for seven years. Her career as a journalist has come to a halt and she’s now working as a presenter for a TV shopping channel and doing very well at it – at least the money is good. Her current gentleman friend Simon is a surgeon and when he doesn’t turn up for a date with her after work she just assumes that he’s probably going off her. But when she goes to his flat she discovers that he is dead.

Very quickly the bodies begin to pile up as the whole world seems to be in the grip of a pandemic which is being called ‘The Sweats’. Stevie contracts it but eventually recovers, one of the very few to do so, for most people it’s a quick death sentence.

But Simon didn’t die of The Sweats and Stevie suspects that he was murdered despite the fact that he supposedly died of natural causes – and so begins her investigation which leads to attacks on her life, while London descends into chaos. The people who haven’t yet succumbed to the illness either load up their vehicles and head out of the city, or begin drinking their way to oblivion.

For me the whole plot didn’t quite hang together so I’m not sure if I’ll carry on with this series.

A recent trip to that place that I’m not supposed to be visiting – the library – ended up with me picking up four books that I had requested from them and three books from the for sale shelves. Honestly, there’s no hope for me!

I bought A Lovely Way to Burn by the Scottish author Louise Welsh. This was apparently a BBC Radio 4 Book at Bedtime, but I didn’t hear it.

The news of Andrea Camilleri’s death had just been announced a few days before and although I love watching the TV programme Montalbano which is based on these books I had only read one of them. So two have just joined my TBR list:

A Nest of Vipers and
The Pyramid of Mud
I’ll read one of those ones for the Reading Europe Challenge which I’ve been neglecting.

A trip into the West Port area of Edinburgh ended up with me buying two books by an author who seemed to be haunting me at one point as everywhere I went I saw his books, just as another blogger told me they were worth reading – the books all disappeared! So when I saw a whole load of Dornford Yates books I snapped up a couple of them. I was drawn to the modern paperback reprint first as I like the stylish cover. The Courts of Idleness is supposed to be funny – so fingers crossed because I need a laugh.

The other Dornford Yates book I bought is an old hardback from 1946 called The Stolen March. It was originally given to someone called Joyce from Kenneth in Falmouth, 8 May 1947. I love inscribed books but I never write in my own although I sometimes think I should. What are your thoughts on the matter?

I try not to buy books via the internet but sometimes you have no alternative as the chances of what you’re looking for turning up in a secondhand bookshop are just about nil, so I bit the bullet and bought The Stream That Stood Still and The Tree That Sat Down by Beverley Nichols, part of a woodland fantasy trilogy for young people. The other one I already had is The Mountain of Magic.

Naming the Bones by Louise Welsh was published in 2010. Louise Welsh was born in England but I think she counts as a Scottish author as she has lived in Scotland for years and she went to The University of Glasgow.

The setting of this book is Glasgow and Edinburgh but it eventually moves to the Island of Lismore in the inner Hebrides.

Murray Watson is a lecturer in English at The University of Glasgow but his career is not really going anywhere and he has decided to do some research on the poet Archie Lunan who had died in mysterious circumstances 30 years previously. Did he commit suicide or was it an accident? But Lunan had only written one slim volume of poetry and there doesn’t really seem to be any more material for Murray to be able to write anything that would be of interest to anyone.

It looks like Murray’s career is on a downward spiral and when he realises that Fergus the head of the department has discovered that Murray has been having an affair with his wife Rachel, Murray thinks he’ll probably lose his job at the university. In a desperate effort to find out something new about Archie Lunan, Murray contacts the old head of department hoping that he can give him some information on Archie Lunan when he was one of his students. It seems that he can’t but he does imply that the person to ask would be Fergus as he knew Archie well. But Fergus had claimed that he didn’t know Archie at all.

Murray takes himself off to Lismore, the island where Lunan had lived for a while and where he had died. The ‘dry’ island is not a place of joy. Archie isn’t the only person to have come to grief there and during a howling winter gale things go from bad to worse.

This thriller was mildly entertaining but not as good as the other books that I’ve read by the author.

Tamburlaine Must Die by Louise Welsh was published in 2004 and at 149 pages it’s a very quick read, and unusually for the author it’s historical fiction.

The setting is London 1593, it has been a bad year with the plague ravaging the inhabitants and threats of war abroad. The playwright Christopher Marlowe has been taken to London from his patron’s country house, under arrest. He has no idea what has caused this change in his luck, but he has been hauled in front of the Privy Council before and survived, he hopes to wriggle out of danger again.

Marlowe had a great success in the past with his play Tamburlaine and it turns out that someone has been pasting blasphemous and atheistic posters all around the city signed Tambourlaine. Marlowe is being blamed for them and the penalty is death, but the Privy Council really want Marlowe to dig up evidence against Sir Walter Raleigh as they’re keen to get rid of him, and they give Marlowe three days of freedom to come up with the goods.

Marlowe knows that someone had given the Privy Council some of his private papers in an effort to incriminate him, and he spends his time trying to track down his betrayer.

I really enjoyed this one. I didn’t know anything at all about Christopher Marlowe beyond that he was a playwright, a contemporary of Shakespeare, a homosexual and of course he famously got murdered in an argument over a tavern bill. It seems to me though that Welsh has written an entertaining and plausible tale around him. Inevitably there’s some homosexual sex involved in this book, if you’re squeamish about that then this book might not be for you. 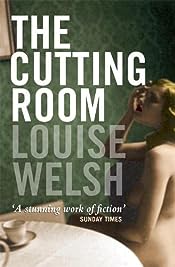 The Cutting Room is the first book that I’ve read by the Scottish author Louise Welsh, it was published in 2002 and was nominated for several awards, including the Orange Prize.

I mention that she’s a Scottish author, but it seems she was born in England, she must have moved to Scotland at a fairly young age I think because this book which is set in Glasgow is pure dead Glaswegian as far as the dialogue goes anyway. But it would be easily understood by anyone I think. It’s quite detailed on the dodgy background of auction houses, but I’m sure that wouldn’t come as a surprise to anyone.

The blurb on the front says: ‘A stunning work of fiction’ Sunday Times – well I enjoyed it anyway although I think for more prudish readers some passages might be a much to take.

The story revolves around a Glasgow auction house where Rilke is an auctioneer, the business isn’t going very well so when they get a call to clear an entire housefull of antiques – if they can do it all within a week, they jump at the chance. The house owner has died and as he has no children it has fallen to his elderly sister to arrange everything.

She tells Rilke that her brother’s private office is in the attic, not easily accessible, and she wants Rilke to destroy whatever he finds in there. He finds some very disturbing books and photographs there and is loath to destroy them as he knows they are worth a lot of money, but it’s the photographs that haunt him and he starts inquiries of his own.

Of course as I knew all the locations the book had that extra dimension for me, being able to picture all the places mentioned and Welsh managed to make Rilke a likeable character despite his many weaknesses, including his penchant for having gay sex with random pick ups from time to time. It’s decidedly sleazy in a few places. It takes all sorts I suppose!

Here we are at another Saturday already, I can’t believe how quickly each week flies past nowadays, there’s another Guardian review section to read today, and I found quite a few interesting articles in last week’s that you might find worthwhile reading too.

If I find a novel features a house to such an extent that it becomes character then that’s usually a big plus for me. I love houses in books, art, crafts, bookcovers — whatever, I’m right there in that house, so I enjoyed this article about famous fictional houses, there are a lot more than Manderley. Do you have a favourite fictional dwelling? Or just a favourite house? Do tell!

I’ve never read anything by Louise Welsh but I read this article about her working day. I hadn’t realised that she lives in Glasgow, near our old stamping ground.

The American author Robin Hobb features in the interview, interesting although again I haven’t read anything by her.

There’s a good article on picture books and novels for tots to teenagers. Although I don’t have any small people in my life nowadays (well not in this country anyway) I’m still drawn to children’s books and sometimes I just have to buy them if the illustrations are particularly gorgeous.

Sarah Dunant’s article is amongst other things about how the historical research that she used for some of her books hadn’t been done 25 years ago. Mainly though she’s writing to promote a BBC Radio 4 podcast – When Greeks Flew Kites, and I believe that anybody in the world can listen to the radio programmes in general.