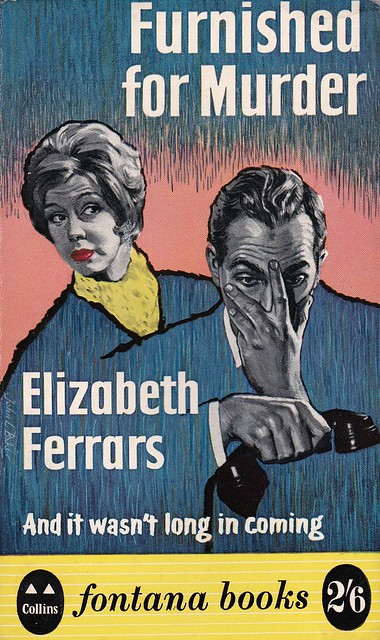 Meg Jeacock and her husband are finding things difficult financially so they decide to section off part of their house and sublet it. It’s not something they’re very keen on doing but needs must. Meg is surprised when she answers her door to a man who is very determined to rent the place, he has been out of the country and has no references but he is happy to pay three months rent immediately and Meg can’t resist, although she knows her husband won’t be too happy about it.

In fact her husband is convinced that their tenant is a dodgy character and it isn’t long before terrible things begin to happen in the neighbourhood.

I’ve enjoyed all of the books by Ferrars that I’ve read so far and this one was really good. I think she should be better known than she is. I love the very 1950s cover on my old Collins Fontana paperback version of it which as you can see cost all of 2/6 but that was probably quite expensive back in the day. If you ever stumble across any Elizabeth Ferrars books you should give her a go. For some odd reason she was marketed as E.X. Ferrars in the US.

This one counts towards the Read Scotland 2016 Challenge. 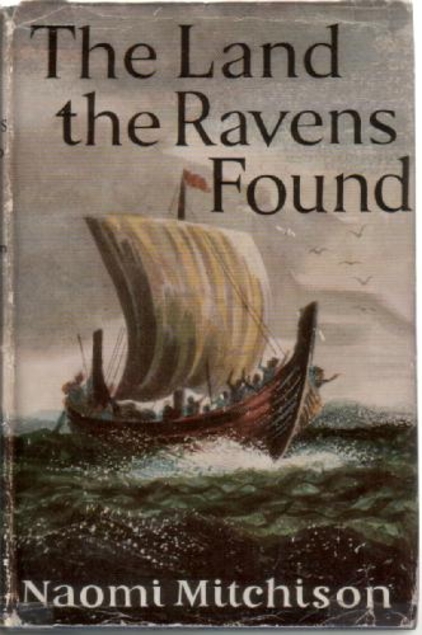 The Land the Ravens Found by Naomi Mitchison was published in 1955 it is a children’s book and I’ve given it three stars on Goodreads. It’s the story of how some people in a Viking community based in Caithness, the far north of Scotland, decide that they are tired of the violent life in Caithness. There’s constant fighting and raiding going on. It’s decided that Iceland is the place to travel to and some of the people who are chosen to go are thralls, Scots and Irish who have been taken prisoner on earlier raids. They’ll be doing a lot of the rowing.

It’s a time when Christianity was beginning to get a toehold on the people and some were giving up the Norse gods for the new religion, causing some tension between those who wanted to keep to the old ways.

Aud the Deep Minded is a wise and respected woman, wealthy too, she’s one of the older women and is a Christian, she decides to organise the building of a ship that will sail them across the sea to Iceland where she hopes to settle down to a more peaceful way of life in her old age. After a scary voyage with the boat piled high with cattle and everything needed to build a new community, they reach Iceland and in time everyone is allotted some land and people pair up to start families. The few Icelandic people seem happy to have the incomers moving in, life has been harder for them and they have very little in the way of luxuries. It seems that their way of life might be improved by the foreigners and they can learn from each other.

My copy of this book is really nice, I suspect that it has never been read as the pages are pristine, lovely thick paper and I think that might be because at the beginning of the book the author throws so many characters at the reader, all with outlandish names, it makes it quite a confusing read to begin with.

However, this book has made me think that I would really like to read the original Icelandic sagas that Naomi Mitchison based this book on.

This is another book read for the Read Scotland 2016 Challenge, number 22.

Naomi Mitchison was an amazing woman who lived to the age of 101. You can read an obituary by Elizabeth Longford here. This one is more personal than the Guardian one below.

You can read her Guardian obituary here.

I’ve had a Virago copy of her book The Corn King and the Spring Queen (1931) for years and it’s about time I got around to reading it. Elizabeth Longford describes it as possibly the best historical novel of the 20th century. What an amazing thing to say, I’m now really looking forward to reading it and hoping I won’t be disappointed.