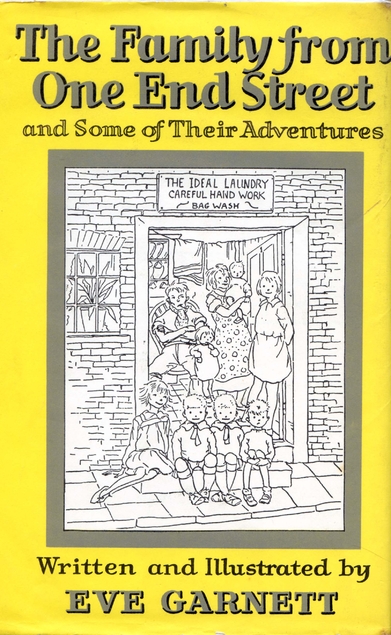 The Family from One End Street and Some of Their Adventures by Eve Garnett was first published in 1938 and it won the Carnegie Medal that year. That must have been particularly sweet for the author, who also illustrated the book, as it was rejected by at least eight publishers.

Those publishers were probably put off by the fact that the book is so unusual in that it is apparently the first book to feature an ordinary working class family. The Ruggles family is a large one – seven children with mum Rosie taking in washing and ironing and the dad Jo being a dustbin man. They live in a small town in Sussex – as did Eve Garnett.

With so many children around there’s always something going on but to begin with we’re told how all the children appear and how they get their names.

The neighbours pitied Jo and Rosie for having such a large family, and called it “Victorian”; but the Dustman and his wife were proud of their numerous girls and boys, all -growing-up-fine-and-strong-one-behind-the-other-like-steps-in-a-ladder-and-able-to-wear-each-others-clothes-right-down-to-the-baby, so that really it was just two sets, girl and boy, summer and winter, Mrs Ruggles had to buy, except Boots.

I found this to be an entertaining read and as until it was published children’s books always featured very middle class children with ponies, bikes and boats and no thought to the clothes that they wore, it must have been a bit of an eye-opener to some people to realise that there were others who couldn’t afford to buy a school uniform for a child who was bright enough to get into the grammar school, and who were constantly taking their shoes to the cobblers to have them mended.

The author herself had a very comfortable upbringing but when she was asked to illustrate a book called The London Child by Evelyn Sharp she was appalled by the conditions that she saw, presumably when she was doing research for her illustrations. It led to her writing this book about an ordinary family struggling to make ends meet, but they’re a happy bunch and I’ll be looking out for the other books detailing their further adventures.

At Christmas I watched the film Saving Mr Banks which is about the terrible amount of wrangling that Walt Disney had to go through to get P.L. Travers to allow him to turn her Mary Poppins books into a film. Actually it’s about the only film that I’ve liked with Tom Hanks in it, I’m not a fan. I didn’t really know much about P.L. Travers- beyond that she hadn’t been at all happy with what had been done to her books, anyway the film Saving Mr Banks was enjoyable and it made me think that it was about time that I read at least one of the Mary Poppins books.

Luckily I found a paperback copy of the first book at the Oxfam bookshop in Morningside, Edinburgh. The book was first published in 1934.

It was an enjoyable read and I was surprised that it was really quite similar to the Mary Poppins film, well the bits of it that they used anyway.

Mary Poppins herself comes across as being less prim and snooty than her film version. Presumably Walt Disney thought it would be a good idea to make her ‘posh’ English. I have heard that all English accents are seen as being upper class in America though – or they were in the past.

This was just a good light read that I embarked on when I was in the midst of a heavy cold, and it filled in one of those gaps that I have in children’s literature, I think I went on to adult books too early really.

At the same time I bought this one I also bought a book called The Family from One End Street by Eve Garnett. I hadn’t even heard of it but it’s apparently a children’s classic and it won the Carnegie Medal. Have any of you read it?