A couple of weeks ago we went to a Roy Lichtenstein exhibition at the Scottish National Gallery of Modern Art in Edinburgh. It’s part of the Reflections series and the exhibition is free. The Water of Leith runs right behind the gallery so we walked along there to Stockbridge which is one of the best areas in Edinburgh for bookshops. If you look closely at the water in the photo below showing part of the Water of Leith at that part of Edinburgh known as Dean Village you’ll see that a lot of the stones have been piled on top of each other and somehow stuck together. I believe that this was done by some random bod in the belief that it enhanced the area in some kind of arty way. I prefer rocks and stones to be piled up by nature and left that way, but each to their own I suppose. 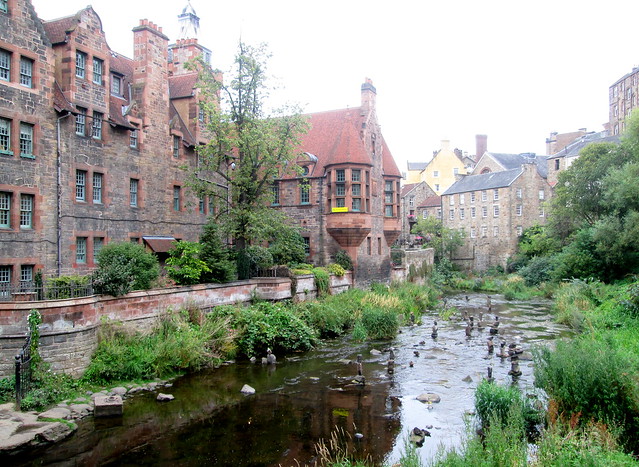 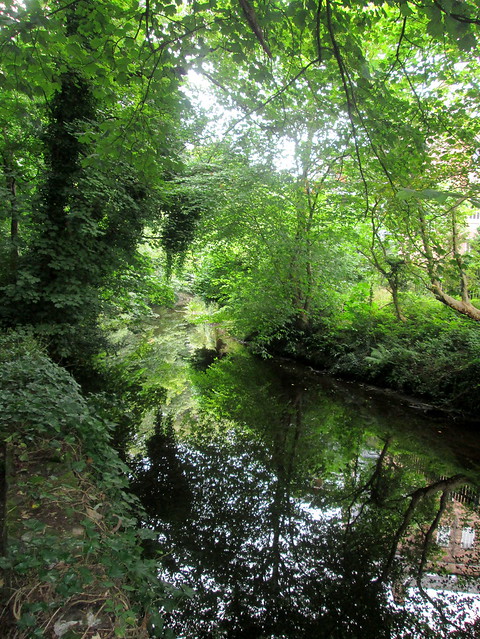 There were some lovely reflections in the water. I always find it hard to believe that the city is so close to such a great walk which feels like you’re surrounded by countryside, not a city. 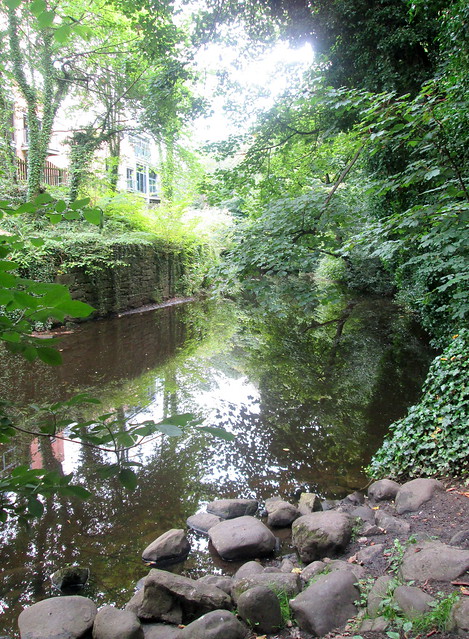 On the way back home we dropped into IKEA – as you do – and it struck me not for the first time that it must be one of the best settings for an IKEA in the world. 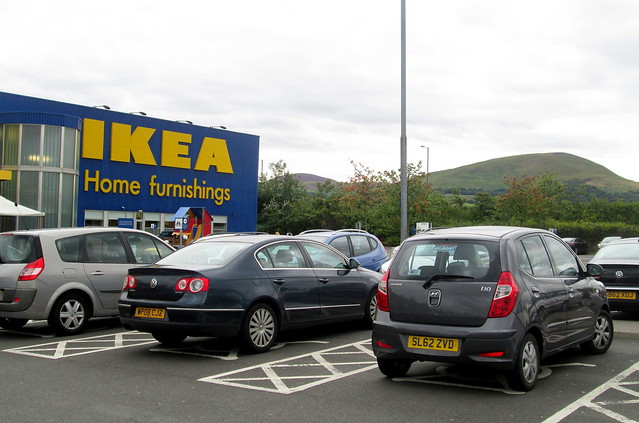 What do you think, is your local IKEA close to such scenic hills? Maybe they like to locate them close to decent scenery – or they have a penchant for blotting the landscape! 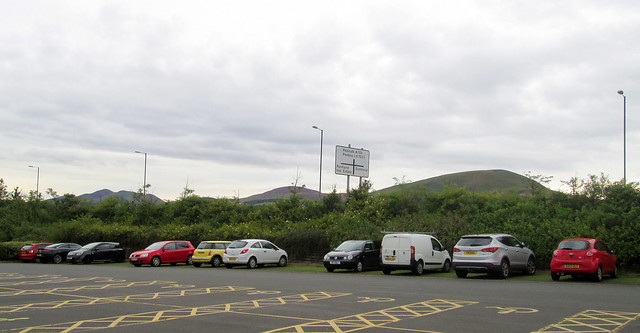 The Glasgow IKEA restaurant has a great view of what I think are The Campsies, but unfortunately I don’t have a photo of that.

We had to drive my brother to Edinburgh airport on Saturday morning so we thought we might as well go and have another walk along by the Water of Leith and into Stockbridge.

So we parked the car at the Scottish National Gallery of Modern Art and had a look round as usual before walking down to the footpath. As you can see they have a neon sign on the gallery building, to cheer us up I suppose. Stockbridge is always dangerous for me because I can’t resist the book shops there, but more of that another day. Apart from being windy, which is the usual situation in Edinburgh, it was a nice blue sky day so we decided to continue the walk along the river in the direction of Edinburgh Botanic Gardens. We hadn’t walked that far before because we usually drive there and I thought it might be a bit too long a walk but we managed it. By that time we were carrying our book purchases too, well I have to admit it MY book purchases because my husband didn’t buy any, so it was all fairly knackering.

We just had to sit down when we got to the botanics, they’ve finished the refurbishment at last, they seemed to have been at it forever, but it’s all spiffing now and must have cost a fortune when you consider the price of stone nowadays. It was VERY busy, but to be honest there wasn’t an awful lot to be seen plant-wise, which was a surprise to me because I think of the botanics as being fairly sheltered but my garden plants seem to be further on than theirs. Most of the trees are still fairly bare but we’ll be going back again to check it out again soon because I wanted to buy a small magnolia from the garden centre but the thought of carrying it the very long way back to the car put me right off because we were exhausted by that time.

I think it was about a 10 mile round walk, which is the longest one we’ve done this year. Anyway I took some reasonable photos, there’s nearly always at least one heron in the river, yesterday there were two, and also a few anglers. I haven’t a clue what they can catch in there, maybe brown trout. I bet the birds would have the most success though. Yesterday was one of those lovely crisp, blue sky autumn days so we took ourselves off to Edinburgh, parking the car at the Scottish National Gallery of Modern Art. After a quick look at the exhibits we took the path by the Water of Leith which leads to Stockbridge again. It’s becoming a favourite walk with us and quite a few others, you can hardly believe that you are in the middle of a city. There are plenty of ducks but it’s the heron that always amazes me. I suppose it must get fish there but it’s amazing how patient it is.

This photograph is just a wee bit further on, you can see one of the massive supports of Dene Bridge to the right.

A bit further on again and you reach St Bernard’s Well which is mentioned in Frankenstein. It was a very popular place to ‘take the waters’ in Victorian times. I wonder how many survived it!

The usual stroll around the Stockbridge bookshops ended with me buying only two books. Both of them hardbacks, Hatter’s Castle by A.J. Cronin (to replace the paperback which I’m sure is in the house somewhere but I can’t find it) and another Rosamunde Pilcher one, Coming Home, which is pristine and cost me all of 99p. I know I’m not meant to be buying any more books and I had intended only buying Viragos or vintage crime but the people of Stockbridge are holding on to those ones themselves.

It’s only about a 10 or 15 minute walk from there to Rose Street and we thought we would go there and have a late lunch at The Black Rose which is a typical Scottish pub, bare floorboards but no sawdust nowadays! We took a bit of a chance as we hadn’t been there before but the food was fine. We didn’t sit outside though because we aren’t quite that mad. Joan in Pennsylvania, but now ‘pining’ for New England had a memorable holiday in Edinburgh some years ago, staying in a flat in Rose Street and I’m wondering if it has changed much since she was last here but I don’t think it’s easy to make out much from my photographs. It’s quite difficult to photograph Rose Street as it’s so narrow. Well, that’s my excuse!

Rose Street used to always be called ‘notorious’ in years past. Not only because it is full of drinking dens but there used to be a famous brothel there. So it was a popular destination for stag nights. Classy!

It has been pedestrianised and ‘tarted up’ – no pun intended, honest. And now there are small, high class jewellery shops and such as well as betting shops and bars.

There are a few mosaic stone roses laid into the paving on Rose Street. Here’s one.

There is an Art Deco type building halfway along Rose Street, the red sandstone one.

It seems to have been a John Menzies once. Maybe it was their headquarters.

There are a few more photographs of Edinburgh to come tomorrow.

When I heard that they were going to be putting some Antony Gormley ‘men’ figures into the Water of Leith, I wasn’t too chuffed about the idea. Last year we went for a walk along the stretch of water from the back of the Modern Art Gallery in Edinburgh to Stockbridge.

It was the first time that we had ever taken that path and it was a great surprise to find a lovely rural and atmospheric spot in the middle of a city. I thought that any man made art work would really ruin the place and spoil the ambience.

So when we stretched our legs along that way again a few weeks ago I was quite relieved and impressed with what I saw. If anything the figures actually add to the atmosphere.

I think the statues are actually supposed to have a use, being a gauge to the level of the river but if you think about it the river would have been used by people thousands of years ago, long before Edinburgh was ever thought of. To me it’s a sort of reminder of this, there would have been people ‘guddling for fish’ and generally getting on with life with the help of the river.

I’m not so sure about the Gormley figures which have been placed atop high buildings in New York City though. They all look to me like they are about to take a suicidal dive off the edge.