This armchair travelling malarkey can be very surprising. A few nights ago I was innocently roaming the internet when I suddenly found myself in Philadelphia of all places – well at least half of me seemed to be there anyway, through the wonders of google chat. It was Joan of Planet Joan on the other end of course and when during our chat she found that she was a wee bit peckish she happened to mention that she had taken ME down to her basement via her Ipad or some such gadget, so that she could get a snack.

I’ve never had a house with a basement and I find the idea quite alarming, so I wanted to know if there was a wee window which you (I) could get out by in case of being somehow locked in there. Joan assured me there was a wee window, then of course I wondered exactly how wee, because I’m not quite as skelf-like as I used to be!

Immediately Winnie the Pooh came to mind, would I be like him and be stuck half-way through the window, or in his case Rabbit’s door. I just love E.H. Shepard’s illustrations 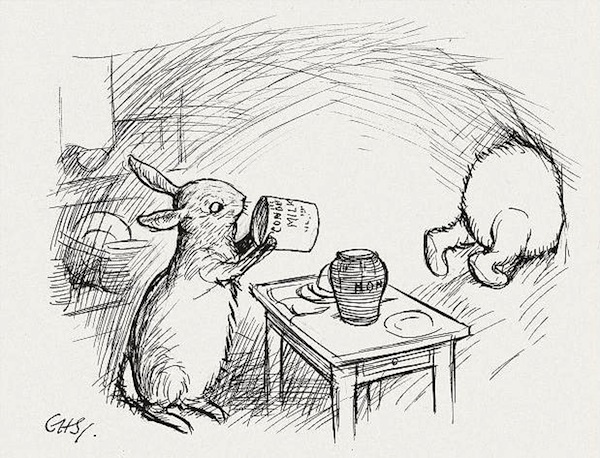 Where is all this silliness leading to I hear you ask?!

Winnie the Pooh was of course written by A.A. Milne and although he was born in England he was brought up in the very strict Scottish Presbyterian tradition, his grandfather was a Scottish Presbyterian minister. So I count A.A. Milne as a Scottish author, if you haven’t already read Winnie the Pooh you might want to do so now and count it towards the Read Scotland 2014 Challenge.

Alan Alexander Milne was born on the 18th January 1882 and I thought about writing a birthday post on that day but then I thought that an ‘unbirthday’ post would be more appropriate.

Although he was born in England A A Milne was from a Scottish Presbyterian background, like so many other authors of childrens’ fiction. The severely strict upbringing seems to have encouraged a wild imagination in those people feeling the need to rebel against such a strait-laced background. Hurrah!!

I didn’t actually read Winnie the Pooh until I had children of my own, and I loved it, in fact I went on a bit of a Pooh binge, reading The Tao of Pooh and Pooh and the Ancient Mysteries as well as collecting classic Pooh ‘stuff’.

Everyone I know seems to be a Pooh character. I think I’m a combination of Kanga and Tigger, depending on my mood, if you can imagine that. Two for the price of one as I keep telling my husband! Which character do you resemble most?

I love the original E H Shepard illustrations and I’m not mad keen on Disney as a rule but I have a soft spot for the 1966 Disney film which you can see some of below.