It is indeed the Winter Solstice which always makes me feel cheery, it’s psychological I know because the nights still take quite a while to get noticeably lighter at night, but as far as I’m concerned the worst of it is under our belt. I can look forward to evening walks in daylight or night time gardening.

Jethro Tull performed Solstice Bells on Top of the Pops in 1976, the year we got married as it happens. The words are below if you feel like singing along!

Ever since I realised that Maeshowe existed I’ve wanted to go there as I’ve always had an interest in Neolithic (Stone Age) monuments and their significance to the winter/summer solstices. Maeshowe is aligned with the winter solstice and the sun shines onto the back wall of the tomb then – if it is a sunny day of course! As you can see, from a distance Maeshowe is a green mound, Orkney is full of such mounds but only a tiny amount of them have been excavated – exciting stuff. If I lived there I’d be tempted to get my trowel out, especially as one woman told me that every time she dug in her garden she found something ancient and interesting. 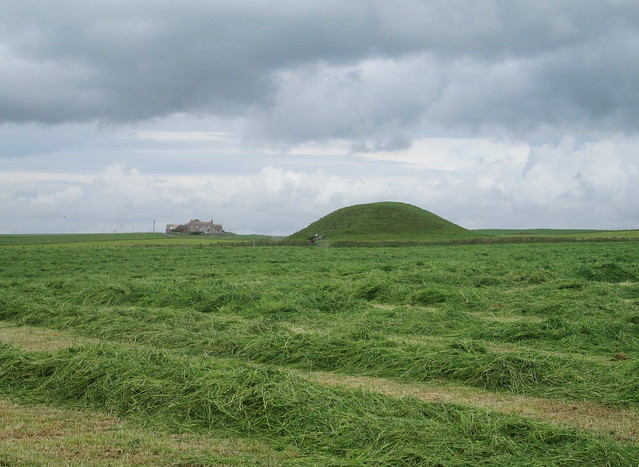 You can see a photo of the interior here.
You have to go on an escorted tour to get into Maeshowe and unfortunately they don’t let you take any photos of the inside of it, not that there is much room to do that anyway. The tomb is 5,000 years old but in more modern times, 1153, some Vikings broke into it to shelter from a snowstorm which lasted for days and they filled in the time by carving runes on the walls, you can read more about that incident here. 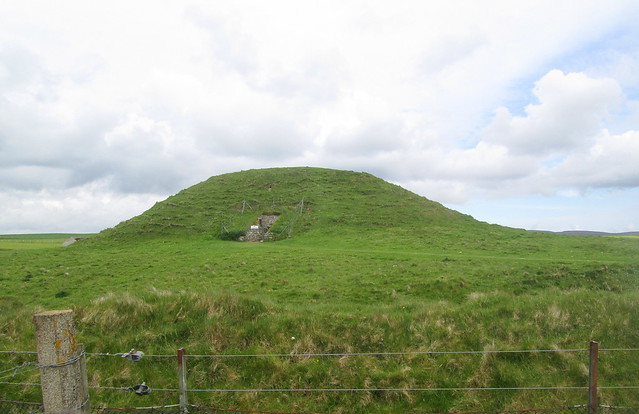 Below is a photo of the entrance and you have to bend almost double for about six yards/metres in a tunnel before you reach the interior. 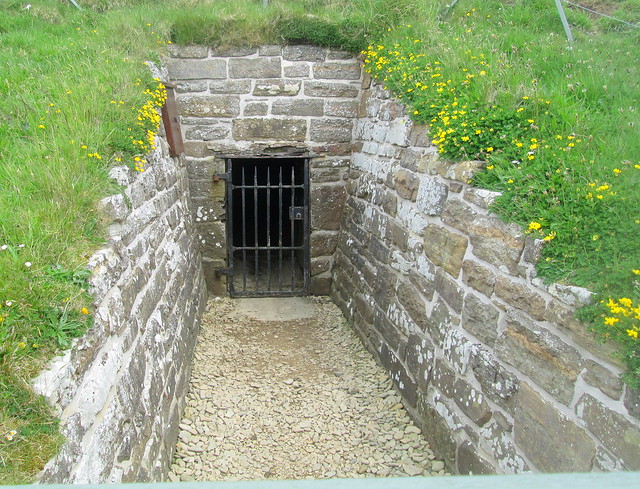 The land around Maeshowe has cows grazing all around it and one American father pointed out to his wee boy that a calf was getting a drink of milk from its mother – he said: These are happy cows. I don’t think they had ever seen anything so rural before.

The photo below is looking over from Maeshowe to the Stones of Stenness and the Ness of Brodgar. 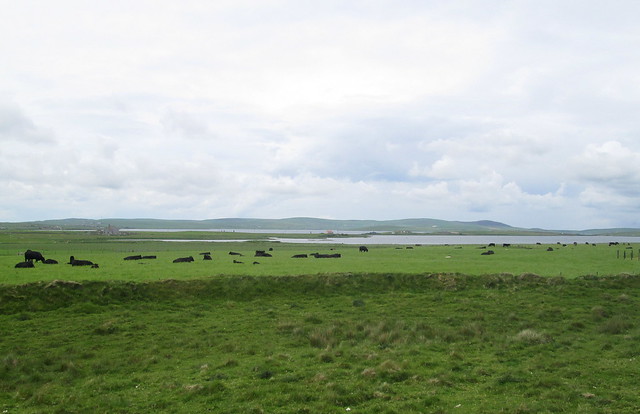 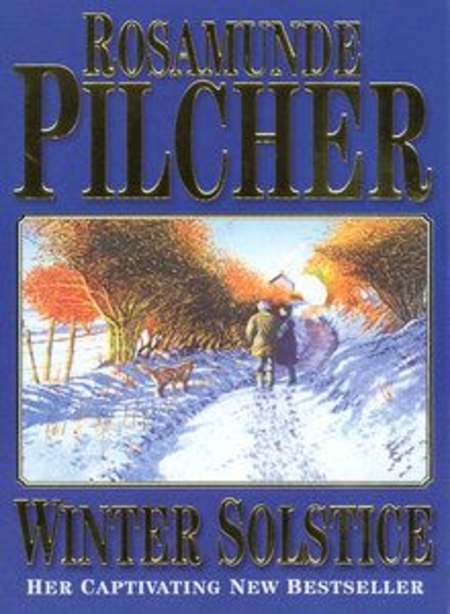 Winter Solstice by Rosamunde Pilcher was first published in 2000 and it was the last book that she wrote as she retired from writing then although she lived for for quite a few years after that.

I’ve read quite a few of Rosamunde Pilcher’s books and I suppose they come under the category of comfort read, although in this one there is a tragedy, but it doesn’t involve any characters that the reader gets very involved with.

Elfrida has retired and moved from London to a small cottage in Hampshire where she intends to supplement her income by making cushions and home furnishings and selling them on to a posh London shop. She makes a good job of settling into her new life and making good friends in the area, she has a gorgeous rescue dog called Horace as a companion, but there’s no doubt that the one person who is most important to Elfrida is her neighbour Oscar, but he’s already married with a young daughter.

Circumstances lead to Oscar having to move back to the north of Scotland where he had been brought up and Elfrida gives up her comfortable life to join him there, and so begins a sort of tour of various houses in that area. In fact I felt that it was a bit like reading one of those glossy homes magazines. Some of the properties mentioned were definitely in need of refurbishment and others were very desireable indeed.

I feel that Pilcher had decided to modernise her writing a bit for the new millenium. One of the main characters is a woman who has had a long term affair with a married man and it has come to an end. I can’t be sure, because it’s quite a while since I read any other Rosamunde Pilcher books but I don’t think she had previously had a main character who had had an affair with a married man. I think in most romances a woman like that would have been seen as a bit of a wicked witch and not the main character.

In fact towards the end of this book something happens (you know me, I don’t want to say too much) and probably a lot of people would think that it is just too unlikely but – hold on to your hats girls – some husbands/widowers DO replace their wives after only a couple of months of their death, well they do in Kirkcaldy anyway. I know, I have said too much! Anyway, Winter Solstice is an enjoyable jaunt from Hampshire via London and on up to the wilds of Creagan which is north of Inverness in the Highlands of Scotland, and you can go on a tour of the places mentioned in the book, have a look here if you’re interested. There’s romance a-plenty too.

You can see some images of Creagan here.

Brrr! This is what I woke up to this morning. 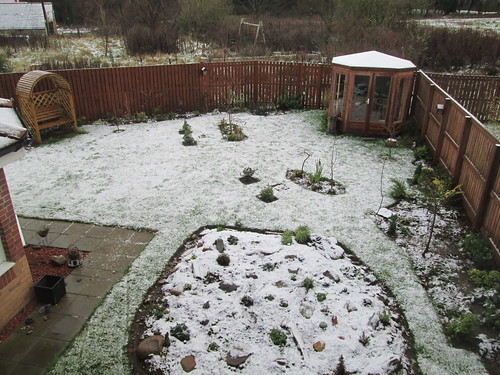 I had somehow managed to forget that the move to the new house, much further away from the River Forth, would mean that we were likely to get much more snow. We did actually drive into Kirkcaldy today and sure enough – there was no snow there!

I’m not mad keen on snow, it’s fine to look out on as long as you have plenty of food in the house, but I hate the thought of having to travel in it. In my ideal world snow would only arrive for Christmas Day and disappear before everybody had to go back to work.

This is actually from 1976, the year we got married.

No, this blogpost isn’t about the Rosamunde Pilcher book of that name which I still haven’t bought. It is the Winter Solstice today, that is the shortest day of the year, and really I always think that we should be celebrating the event instead of waiting another few days and celebrating Christmas. But if you have kids you have to stick with the Santa Claus stuff. We did tell our kids that Santa was dead now and people just pretended. Honestly it didn’t do them any harm and they enjoyed their Christmas just as much, but I did get nasty looks from other mums at the nursery. Silly them!

In good old Pagan Celtic times this was our winter festival, something to look forward to. Anyway the 21st of December always cheers me up because I hate the dark days of winter, when it begins to get dark at 3 o’clock in the afternoon and it’s dark by 4 o’clock.

After the solstice the daylight begins to get a teeny wee bit longer day by day and even although the worst of the winter weather is probably still ahead of us, (but surely not this year) I’m always able to look forward to the lighter, longer days.

This year the solstice is extra special because there is also a lunar eclipse which you can read about here.