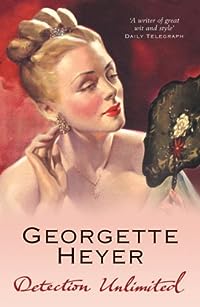 This book was first published in 1953 which is one of my favourite eras for vintage crime but I didn’t enjoy this one as much as I’ve enjoyed some of Heyer’s other crime novels. It was the last of her mysteries/thrillers to be published.

The setting is the up-market village of Thornden and it’s the sort place which has prominent inhabitants vying to be the most important people in the district. Nobody likes Sampson Warrenby, a newcomer who has only lived in the village for 15 years and has spent his time getting into positions of power in all the local clubs and committees.

When he is found dead at his desk the villagers aren’t exactly bereft, but it’s murder and Chief Inspector Hemingway has 10 suspects to work his way through. All the suspects spend their time pointing the finger of blame at each other and being otherwise disagreeable. Hemingway and his side-kick Harbottle are the best characters in the book and their banter with each other just managed to save it from being a book which I really didn’t care about at all, just because I didn’t like any of the villagers so would have been quite happy for any of them to have ‘swung’.

I have really enjoyed some of Heyer’s other crime novels but I think she was at her best when she had male and female characters which she gave a lot of snappy dialogue and humour, that wasn’t really a feature of this one.

I’m glad I read it though as I want to complete all of her mystery fiction, I think I only have two left to read now. On the other hand I’ve only read two or three of her Regency romances and I don’t know if I have the energy to plough my way through her long list.