Linda Grant has chosen to write about Jean Rhys in the Guardian review section this week. You can read the article below. 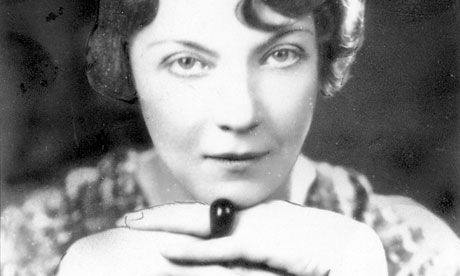 The 20-century novelist Jean Rhys
A level gaze… Rhys is mainly known for the post-colonial context of Wide Sargasso Sea, but her Paris-set 1930s novels have chilling power.

When I was in my 20s in the 1970s I read all of Jean Rhys. I have reread very little since because the first impressions were so powerful they have stayed with me.

Rhys is mainly known for her novel Wide Sargasso Sea, a retelling of Jane Eyre from the perspective of the mad wife in the attic, and I scandalised an audience at the British Library a few years ago by claiming it was a greater novel than Charlotte Brontë’s. Rhys in recent years has most often been seen her in the context of post-colonial writing, but it was the novels written and set in Paris in the 1930s that chilled me to the bone.

A woman, somewhat faded, sits in a room waiting for the post, which might contain a cheque from a former lover that will give her the money to buy a new dress so she can sit in a cafe and attract a new lover. There is a fine line between this and prostitution. I used to wonder if her female characters were simply Jane Austen heroines kicked away from Hampshire and left stranded in the early 20th century. Work is always a last option, jobs are for the defeated, there is no sense of a career leading to independence.

When I read Rhys, I lost interest in fireworks in fiction. Sentence after apparently unremarkable sentence would pass until suddenly you would feel yourself hit in the solar plexus by the accumulated tension. I would look back and ask: how did you do that?

She is the novelist of longing and yearning and rage and sexual desire, and the need for nice clothes and the fear of what happens to women when they lose their looks and become the old woman alone upstairs, drinking alone, smoking alone, dying alone. In After Leaving Mr Mackenzie, the character Julia appears to have no instinct for self-preservation. Yet her creator endures, one of the 20th-century greats. I would die to write like her.

I can’t comment on her novels which are set in 1930s Paris as I haven’t read any of them, but I do have a copy of Good Morning, Midnight – so I think I’ll bump it up my reading pile as I’m intrigued to know what it’s like now.

I have read Wide Sargasso Sea – twice in fact, and watched it on TV but I was never greatly impressed with it. I certainly don’t rate it as highly as Jane Eyre. But – each to their own I suppose.

4 thoughts on “From the Guardian: My Hero – Jean Rhys”