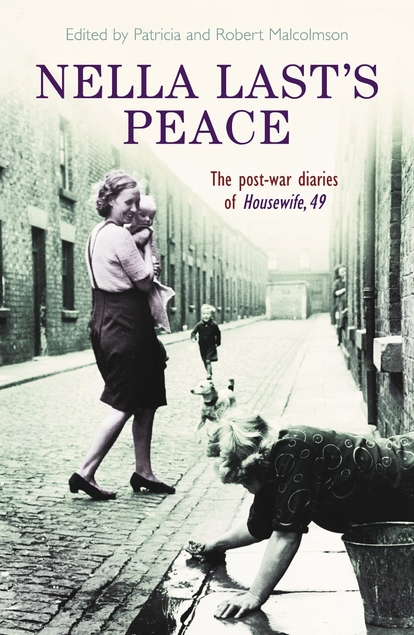 Luckily I have a copy of Nella Last’s Peace so I was able to dive straight into it after finishing her war-time diaries. I love being in her company although for quite a lot of this book Nella was suffering from poor health, almost certainly due to the end of the war meaning that she no longer had a reason to get out of the house and meet lots of people. Her life was closing in around her again, it’s a sad fact that the war had given a lot of people a purpose to live, they all felt they were pulling together against a common enemy – Fascism.

After the war rationing actually got worse and there are far more mentions of tinned food in this book, it seems that it was much more difficult for Nella to make the delicious meals that Will had been lucky enough to be given during the war. As Nella loved cooking and feeding people it must have been difficult for her. Petrol was also rationed until mid 1950 but luckily Will always managed to have enough to drive Nella to her beloved Coniston in the Lake District from time to time. I think it was only those trips and her beloved pets that kept her sane, but over the years she learned to be more positive and ‘polish up the dark side’.

The suicide rates particularly for women were pretty high and there seem to be a lot of them amongst Nella’s acquaintances – and they were reported in the local newspaper, something that they tend to keep quiet about nowadays if possible. Perhaps it’s just as well that we now have non poisonous natural gas and not coal gas as the preferred method of ‘topping’ themselves seems to have been to stick their head in the gas oven.

These peace-time diaries concentrate on neighbours and family members, Nella still has worries about her sons and her relationship with Will her husband is still up and down, they’re really a mis-matched couple, complete opposites who should never have married. There were times though when I was on Will’s side although after 35 years of marriage I was surprised that Nella didn’t seem to know him as well as I did. How could she have been happy that for one he had made a quick decision about buying a new (to them) car? I knew it was going to end up a disaster!

I found it very frustrating that about 18 months of the diaries went missing during the war and in that time obviously a lot of things happened. For one thing we don’t know what happened to Nella’s chickens, suddenly they aren’t there and she’s having to barter for fresh eggs.

Nella comes across as being a very caring person with a conscience which led her to being taken advantage of, particularly by her husband’s family, all of whom had treated her quite badly over the years, but it didn’t stop her from organising care for them in their old age.

Mostly though I think it was taking part in the Mass Observation experiment that had a big impact on her life and writing these diaries, getting it all off her chest, and also in some way becoming a writer, something she had always fancied doing. I’m sure she would have been amazed to see what had become of her writing. She also spent a lot of time writing to various people during the war, to friends of her sons who were servicemen and such, I bet those letters were looked forward to. I wonder if any of those were saved, I’m sure they would have made entertaining reading too.

6 thoughts on “Nella Last’s Peace – The post-war diaries of Housewife, 49”